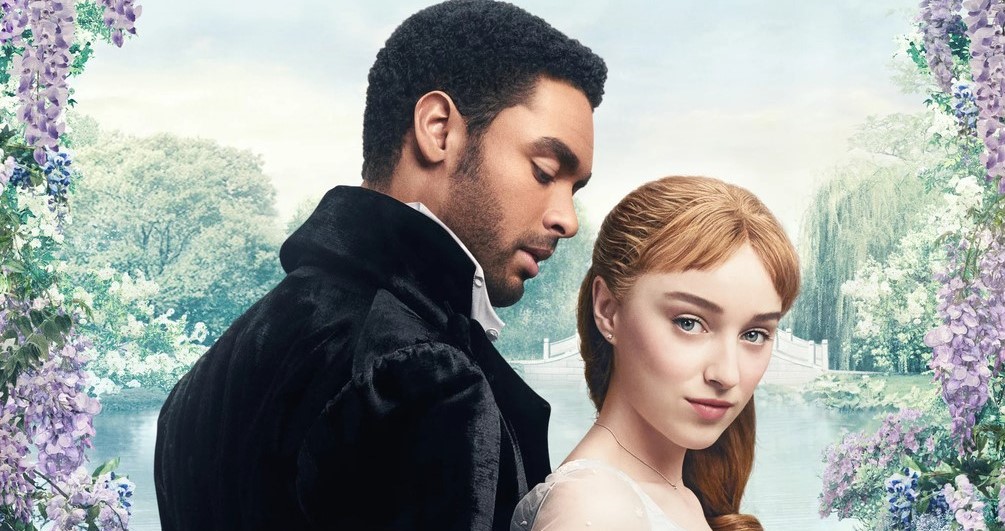 ‘Bridgerton’ is a big hit, but what does it really say about the past and the present?

The latest hit on Netflix is said to be the Regency Romance series Bridgerton based on the novels by Julia Quinn. I’ll begin with a disclaimer. I’ve never watched this show and don’t intend to. I have better things to do with my time. However, while making a study of the state of the Regency Romance a few years ago for my writing class, I read one of Julia Quinn’s efforts and hope never to have to do so again.

I hear one of the major controversies surrounding this series is that many of the upper-class characters are played by actors of colour. I have no argument with equal opportunity casting. This has been the rule in the theatre for some time. However, the theatre no longer has to be ruled by naturalism. That mantle has been taken by film. Its audiences expect and assume that the story they are watching, even if fiction, is being presented as realistically and as historically accurately as possible. (Remember the furore about a takeaway coffee cup being spotted in an episode of Game of Thrones?) In fact, audiences have been known to take a film as gospel truth. (I recall another furore around a blogger who judged Queen Elizabeth I, the Virgin Queen, the worst mother in history based on the film Anonymous.)

So film has a duty of care. Unless it’s made clear that the production is in a fantasy genre, it must strive to present as true and authentic a picture as it can, of the present, indeed, but, I would argue, more importantly, of the past. Historical fiction texts have the same responsibility.

I marvel at the huge gaps, if not total blanks, in the historical knowledge of our young people today. How is it that they have learned so little about the history even of their own country, let alone any other? After all, World War II happened before I was born, but I knew all about it. How is it that I, who went to school before the internet age, know about history, while our young people don’t? How did I learn about it?

Some of it I learned at school, and some I learned from my parents and grandparents. There were period dramas and historical documentaries on television. But more important than any of these were books. I read and read everything I could get my hands on, and a lot of what I read was historical fiction. It was historical fiction which rounded out my knowledge. From school I learned the names of the six wives of Henry VIII, but it was from historical fiction that I learned why he married each one and how they each came to their demise.

This is the purpose of historical fiction, and it is a noble one, to ensure that we do not forget where we came from. It has the duty to show young people that culture is not static, that it changes over time and in response to changing conditions. Historical fiction can teach us not to take the world as we know it for granted. It can teach us that those freedoms and conveniences which we enjoy did not always exist, and thus might not always continue into the future.

This is why historical fiction must be accurate. We can reinterpret the few details we have and perhaps weave a new narrative, but we must keep to the known facts and to the actual usages of the time. (We might, for example, posit that Shakespeare didn’t write his plays, but we wouldn’t have him writing on a typewriter by electric light, or writing scurrilous verse about Queen Elizabeth and getting away with it.) Yet, too often modern writers are projecting onto the past contemporary conditions as though they are trying to remedy what they see as the failures of history.

I will concede that there may be some points of historical accuracy in Bridgerton, but I don’t think we should marvel that an author of ‘historical’ fiction has done some research and made sure to get the basic facts right and found a few titbits of information she can weave into her story. But there’s more to historical accuracy than getting the date of the Battle of Waterloo correct, or how they tied their cravats. What about the way people thought and acted?

YouTube historian Dr Kat has examined Bridgerton in her video Bridgerton: Finding Fact in Fiction? and has found that, yes indeed, there were much-admired pugilists of African descent in London at the time, and upper-class men would spar with them in their gyms, but one would never have been invited to a society ball as depicted in the series. This is a class-bound world where people of pure British descent would never have been tolerated by polite society if they were not of a high enough class, much less a descendant of slaves.

Young people of colour are too much aware of the reality of persistent racism to be taken in by this fantasy. My concerns lie with the influence of this kind of literature on young women.

Take for example the one work I have read by Julia Quinn, The First Kiss, one of four Regency Romance novellas by bestselling authors that make up the anthology Lady Whistledown Strikes Back, published by Avon Romance in 2004. (see my Goodreads Review) Julia Quinn’s hero is an army officer who falls in love with the sister of a fallen comrade. When her aristocratic father consents to their betrothal the hero goes around to the heroine’s house in the middle of the night to tell her the good news and, being too honourable to take her virginity, performs oral sex on her in the salon. That one was quite mild compared to the sex in the other stories. One couple seals their engagement by sneaking off into the bushes for a quickie up against a tree in Hyde Park in the middle of the afternoon, and another celebrates their reconciliation in a torrid scene that involves the application of raspberries and crème. (I daresay Bridgerton continues in this fine tradition.) 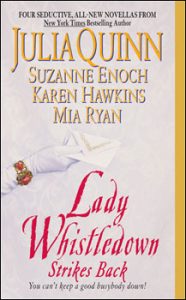 Perhaps I’ve led a sheltered life, but I couldn’t believe what I was reading. There was nothing remotely historical about these stories. The historical setting seemed to be there just to make the sex a little bit more titillating. And to think that Julia Quinn is being touted by her publishers as ‘our contemporary Jane Austen.’ Talk about taking the poor woman’s name in vain! She and Georgette Heyer would be spinning in their graves if they knew what has become of the tradition they began.

When I blogged about this, many of my readers were perplexed. They couldn’t see what my problem was. After all, they insisted, people did have sex in those days. And of course they did, or we wouldn’t be here. But there were strict rules about sex back then, rules that were different from ours, and if you broke the rules there were consequences. (And this is even before we take into consideration the danger of venereal disease before antibiotics, or unwanted pregnancies before freely available contraception.)

Even the virginal Jane Austen had to acknowledge that passionate affaires did take place outside of marriage. Lydia Bennet runs off with Mr Wickham. Marianne Dashwood comes very close to succumbing to the charms of Mr Willoughby. Maria Rushworth leaves her husband for Mr Crawford. But there are dire consequences for them all. Lydia is forced to marry a man of neither principles nor prospects. Marianne almost dies of a broken heart. Mr Crawford abandons Maria and she spends the rest of her days in enforced isolation.

Such consequences were not only suffered by the gentry or only in fiction. In her book Passion and Principle: The loves and lives of Regency women (John Murray, London, 1996) Jane Aiken Hodge tells us the rules Regency women lived under when they fell in love. In these true-life stories we discover women who passionately followed their hearts, but could not avoid suffering the consequences of breaking those rules. While, their lovers and husbands, of course, suffered no consequences whatsoever. 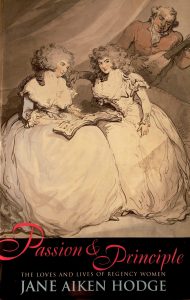 Lady Sarah Lennox’s prospects of a good marriage were destroyed because she had been wooed then slighted by a prince, who went on to become George III. After bearing him ten children, the actress Mrs Dora Jordan was discarded by her prince when he needed to make a dynastic marriage. He went on to become William IV. The Duchess of Devonshire died of a broken heart after being forced to give up her lover, Charles Grey, who later became Prime Minister. After her death, her husband, the Duke of Devonshire, promptly married his mistress. Her sister, the Countess of Bessborough, kept faith with her lover, while he searched for a suitable wife. When Lady Hester Stanhope was abandoned by her lover far from home, she could never return to England while he not only returned with his reputation untarnished but went on to pursue a political career.

In the kind of Regency Romances written by Julia Quinn and her ilk, women suffer none of these consequences. I can understand that modern authors might be unhappy with the oppression women suffered and accepted in the past, and feel that by portraying these realities they might put potential readers off. Instead, they portray their heroines not as women of their own time, but as pseudo-modern women who have miraculously managed to obtain our current freedoms from male dominance, pregnancy and sexual diseases. Not only are these Regency Romances, supposedly set in early 19th century England, written by Americans, they are written in modern American English, peopled by characters indistinguishable from modern Americans, with a modern American’s language, mindset and sexual morals, albeit without recourse to a mobile phone. It’s as though they are contemporary participants in a reality TV show like Regency House Party, but with even fewer restrictions.

These novels and the filmed productions they spawn, give young women not only an inaccurate picture of the past, but also of their present. The liberated conditions under which women live now have only existed for the last fifty years at most and were hard fought. To project them onto the past is not only doing the feminists a disservice, but also our young women of today. To give them the impression that these freedoms have always existed and are normal and natural is to make them complaisant and unprepared to resist any encroachments on them. It is to open the way to losing those very freedoms they take for granted. And, indeed, this is happening in the very country where these Regency Romances are written and productions like Bridgerton originate.

As it was once famously said: Those who cannot remember the past are condemned to repeat it.