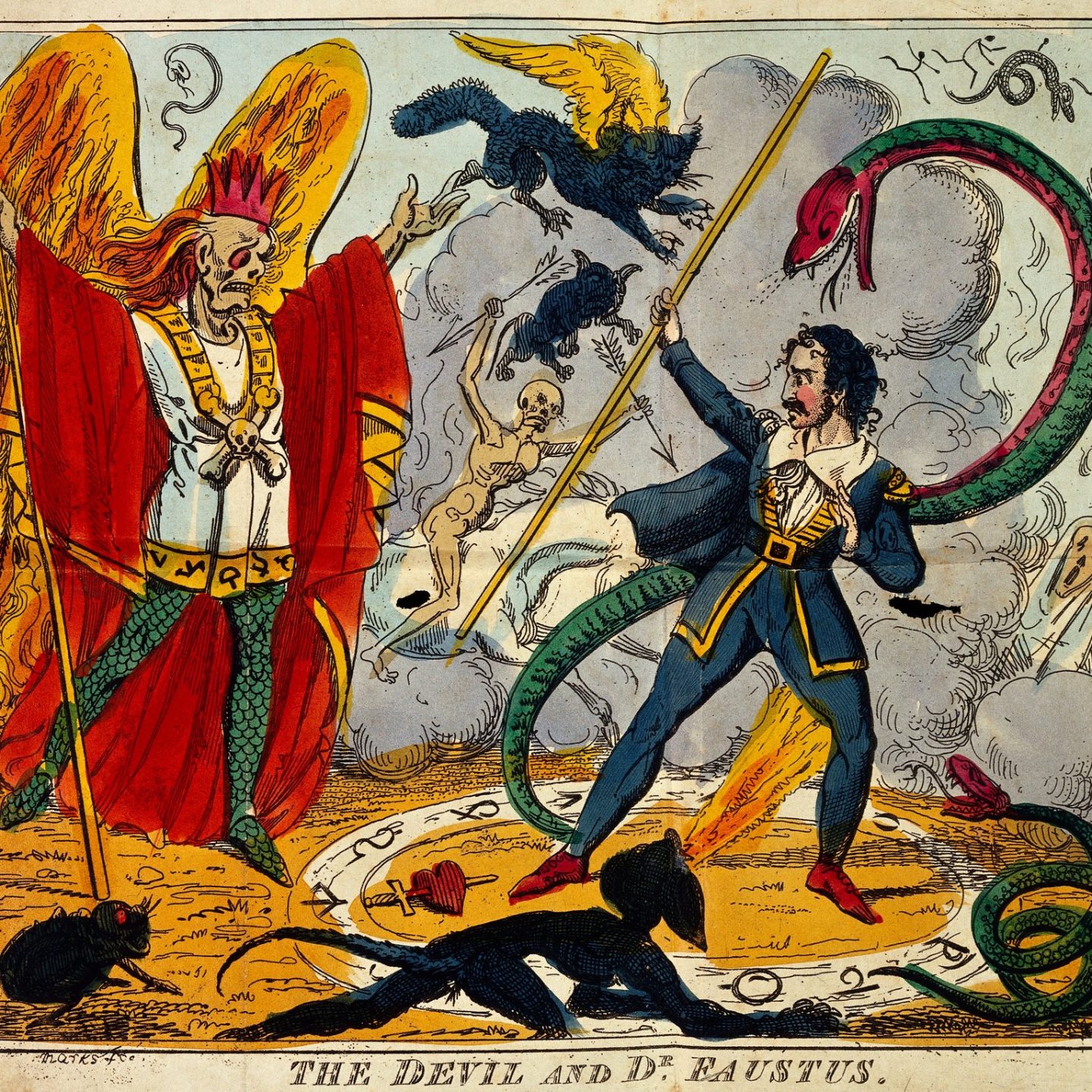 In reality, we know little about Shakespeare’s contemporary, Christopher Marlowe, and much of his reputation is based on his dark and cynical plays.

While Christopher Marlowe was Shakespeare’s exact contemporary, perhaps his mentor and certainly his precursor, his work is little known outside academic circles. (see Christopher Marlowe and William Shakespeare) This can, in part, be attributed to his publishing history. While Shakespeare’s friends compiled the First Folio which immortalised his work, no such compendium was created for Christopher Marlowe. There is no definitive list of his works nor authorised texts of his plays. While his genius is widely acknowledged, only a handful of poems, a few translations and half a dozen plays have survived to be indisputably credited to him, and we can never know how much of his work has been misattributed or lost altogether.

The earliest of Marlowe’s plays is believed to be Dido, Queen of Carthage (first published in 1594) which is based on Virgil’s Aeneid. It was most likely written while he was a student at Cambridge for a boys’ company. Much of the play is a direct translation of the original epic poem, but Marlowe has added his own twists to the plot and characters, as well as touches of his own dark and satiric humour. This is especially evident in his treatment of the sexual relationships which mostly challenge the accepted norms.

Tamburlaine the Great (first published in 1590) was Marlowe’s first foray into the public playhouse and such an immediate hit that a sequel soon followed. Tamburlaine, who is based on an historic Mongol military leader, begins life as a humble shepherd but goes on to become a ruthless conqueror, defeating nation after nation, massacring and enslaving as he goes, his only weakness being his passion for Zenocrate, a prisoner who becomes his bride. Known as ‘The Scourge of God’ Tamburlaine is also a pious Muslim who defeats perfidious Christians but dies after burning the Koran in a perverse act of faith. Tamburlaine was an exhilarating departure from the standard play about Eastern conquerors which turned them into chivalrous knights or proto-Christians.

The Tragical History of Doctor Faustus (two surviving texts published in 1601 [A-text] and in 1616 [B-text]) is Marlowe’s version of the traditional story of the scholar’s pact with the devil. His Faustus is a seeker after knowledge who is unsatisfied by what his university can offer and so sells his soul to Satan through the demon Mephistopheles in return for knowledge and power over nature. But while traditionally Faustus repents his sins and is saved, Marlowe’s Faustus refuses salvation and is carried away to Hell. One of Faustus’s demands of Mephistopheles is to have Helen of Troy as his mistress and thus says to her one of Marlowe’s most famous lines: Is this the face that launched a thousand ships?

Edward II (first published in 1594) traces the history of this tragic king who allows himself to be totally dominated by his favourites Piers Gaveston and then later Hugh Despenser. His homosexual infatuations drive his wife Isabella into the arms of Mortimer and together they lead a rebellion of the nobles against his rule. The nobles capture and execute first Gaveston and then Despenser before finally defeating and capturing Edward himself. He is held in filthy and humiliating conditions until he is horrifically murdered by having a poker inserted in his rectum. Edward II is possibly the only English play before the modern age that deals openly and sensitively with sexual relationships between men and the dire consequences that can ensue.

The Rich Jew of Malta (earliest surviving quarto published in 1633) is a very dark black comedy introduced by the notorious Machiavel himself. When the Knights of Malta strip the Jew Barabas of all his wealth in order to pay off the threatening Turks, he takes out his revenge in a deadly plot that does not even spare his beautiful and virtuous daughter.

The Massacre at Paris (first published c.1602) follows the events of Saint Bartholomew’s Day 1572 and its aftermath. After the marriage of the Catholic French Princess, Margaret of Valois, to Henry, the Protestant King of Navarre, the Catholic faction, led by the Duke of Guise, systematically massacres the French Huguenots who have come to Paris to attend the wedding, bringing on the French Wars of Religion which eventually drive Henry of Navarre onto the throne. With grim black humour, Marlowe depicts these events as the result of personal ambitions and rivalries.

As it is hard to believe that such an energetic writer could have produced so few plays, several others have been attributed to Marlowe, some with more conviction than others. They include The Troublesome Reign of John King of England, The Famous Victories of Henry the Fifth, The True Tragedy of Richard III, Arden of Feversham, The Taming of a Shrew and several of Shakespeare’s early plays. While Marlowe’s claims on these plays are rather flimsy, a strong case can be made for his having had a major role in the authorship of Edward III and his co-authorship of the three parts of Shakespeare’s Henry VI has been acknowledged by the academic mainstream.

As well as there being no definitive canon of Marlowe’s plays, there is no definitive text against which to compare the few surviving quartos. As with all playwrights of his era, Marlowe lost control of his plays once they were sold and he would only have seen Tamburlaine published. His plays could have been subject to censorship, additional material, pruning and even extensive re-writing. We cannot be sure, therefore, how closely the surviving texts mirror Marlowe’s original.

While the texts of the two parts of Tamburlaine seem relatively intact, the original publisher removed the clowning scenes, deigning them as unworthy for inclusion in the play. He may well also have done so because he did not deem them part of the original script.

There are two versions of Doctor Faustus. The shorter and older A-text is unusually short for a Marlowe play and the comic scenes are sketchy. The later and longer B-text is suspected of being a re-write of the A-text. We know from Henslowe’s diary that in 1602 he paid two authors for additional scenes for Faustus. My own reading of the text is that much of Marlowe’s original script has been dropped and replaced with the clowning scenes.

The Massacre at Paris is also considerably shorter than the usual Marlowe play and a page of manuscript has been discovered showing a longer version of one of the speeches, giving the impression that the whole play has been pruned. The character of Henry of Navarre is also too much the Protestant saint when his actions suggest Marlowe’s depiction of him was originally much more Machiavellian.

While each of Marlowe’s plays is different and another leap forward, there are common themes that can be traced through them. Marlowe’s protagonist is more of an anti-hero than a hero. Generally he is a man of ruthless ambition and greed who does not let scruples deter him from his goal and is often a devious Machiavellian. Tamburlaine is the epitome of the Marlovian overreacher in his quest to conquer the world, as is Faustus with his desire for esoteric knowledge and power. In Edward II the Machiavellian character is Mortimer, who seduces Isabella to achieve his aims. Barabas too is typical of the Machiavellian character as is his off-sider Ithamore. In The Massacre at Paris it is the Duke of Guise leader of the Catholic faction, but though he may be the most extreme he is not the only one.

Another common theme is Marlowe’s cynical take on sexual relations. He does not see love as beautiful or constructive, but rather as a destructive passion which drives one party to trying to possess and control the other. Dido tries to force Aeneas to stay with her and then commits suicide when she fails. Tamburlaine forces his attentions onto his captive Zenocrate until she has no choice but to marry him. Faustus wants to have control over the ghost of Helen of Troy. Edward’s passion for his favourites leads to his destruction while Isabella and Mortimer are united more by their mutual hatred than love. Barabas uses his daughter’s beauty to drive two men to fighting over her, while all the relationships in The Massacre at Paris are destructive.

However, there are some myths about Marlowe that are too often repeated. Sometimes in discussions about whether one or other anonymous play can be attributed to him, critics will vote against the attribution because the play’s style is not bombastic enough, as though this is Marlowe’s one register. Marlowe uses a highly rhetorical style in Tamburlaine, but this is because it suits the character. As the brilliant writer he was, he matched the style of his writing to the characters and themes. No such bombast can be found, for instance, in The Rich Jew of Malta or Edward II.

Another myth is that Marlowe could not write comedy. I would argue that Marlowe did not write the clowning scenes attributed to him, or overtly comic characters, as his contemporaries did. Marlowe’s humour is embedded in the play, but it is a dark, satirical and ironic humour, which a modern audience might appreciate more than his contemporaries did.

The final myth is that Marlowe could not write for women. It must be remembered that Marlowe did not write for women. In fact, he was not allowed to. He wrote for boys playing women. Writing dialogue for boys to play that comes across as a credible woman would be an art form in itself, now long lost. One critic, H.J. Oliver, noted of Marlowe’s plays that ‘when a drama such as Dido is acted by boys, it is the parts of the women that “come over” realistically’.

As with Shakespeare and most of his contemporaries, while he left more documentation of his day-to-day life than Shakespeare, very little is known of Marlowe as a man. As a consequence, with little else to rely on, Marlowe’s few surviving plays, with their black humour, cynical take on human nature and Machiavellian anti-heroes, have unduly coloured perceptions of his own character and have bequeathed him, perhaps undeservedly, a dark and violent reputation. (see Christopher Marlowe’s History of Violence) However, whatever his reputation there no doubt of his genius and the importance of his contribution to the flowering of Elizabethan drama.