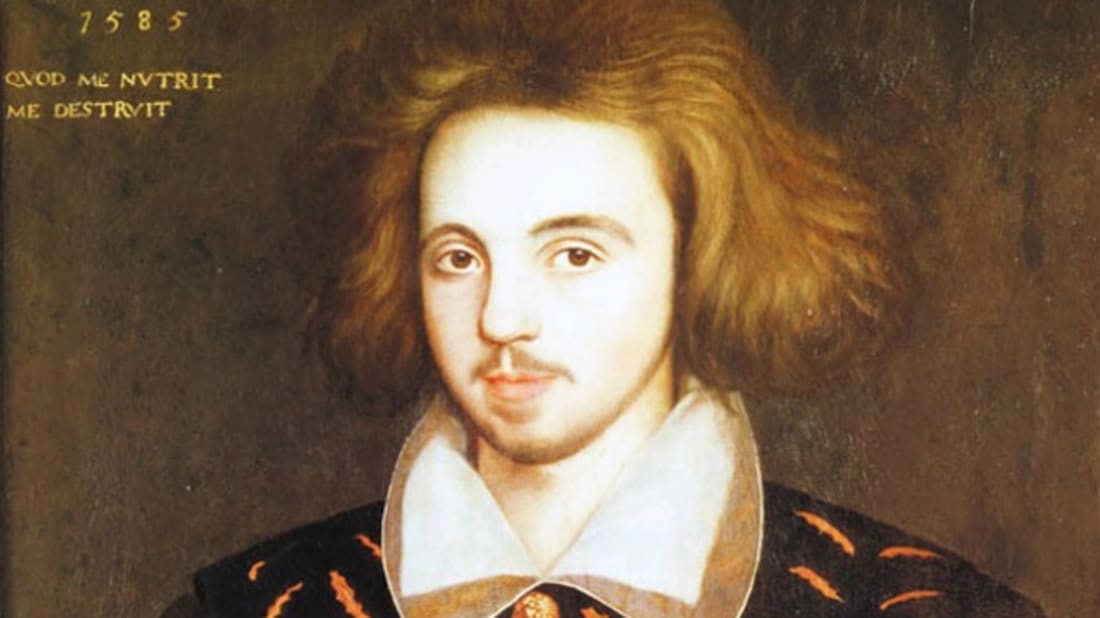 When William Shakespeare arrived in London, the darling of the London stage was Christopher Marlowe.

On October 25, 1976, Queen Elizabeth II opened the new premises of the National Theatre. The theatre’s inaugural production was a tandem presentation of the First and Second Parts of Tamburlaine the Great which played to packed houses and rapturous applause, just as they did almost four hundred years earlier under the first Queen Elizabeth.

The tale of a Scythian shepherd who conquers half of Asia, Tamburlaine the Great was the first masterpiece by the then twenty-three year old recent Cambridge graduate, Christopher Marlowe, a rebellious young genius who was to revolutionise the Elizabethan theatre and pave the way for another young genius, William Shakespeare.

Born in 1564 in the cosmopolitan town of Canterbury, the son of an up and coming shoemaker, Christopher Marlowe won a scholarship to the King’s School whose innovative curriculum included the Latin classics, history and music. He then won a further scholarship, intended for the education of clergymen, to Corpus Christi College, Cambridge, where, against all the strict rules of his religiously conservative college, he translated the erotic love poetry of Ovid and the military verse of Lucan, as well as writing the play Dido, Queen of Carthage based on Virgil’s Æneid. All these influences went into Tamburlaine the Great, his first venture onto the public stage, which was soon followed by several more ground-breaking plays — Doctor Faustus, Edward II, The Rich Jew of Malta and The Massacre at Paris. (see The Plays of Christopher Marlowe)

In his short career, Marlowe’s ‘mighty line’ breathed life into the blank verse form, creating a new style which was to be perfected by Shakespeare. He brought to the stage a fusion of poetry and drama, combining his free-flowing verse with skilful stagecraft. Ever an innovator, he wrote in a variety of genres and styles, setting trends for others to follow and creating unforgettable characters. He is particularly remembered for the Marlovian over-reachers — ambitious, driven men who do not let conscience stand in their way.

Marlowe’s stage career was only one aspect of his life. While still at Cambridge, it is believed he was recruited by Sir Francis Walsingham to his secret service. What Marlowe actually did in his role as spy can only be speculated on, but his work may have involved informing on his fellow students, infiltrating the English Catholic seminary at Rheims, acting as a courier and reporter in France, as well as infiltrating Raleigh’s School of the Night. These activities won him many enemies and a reputation as an intellectual and religious dissenter.

In April and May 1593, social unrest in London, targeted at the Protestant refugees who had fled persecution in France and Spanish Flanders, was expressed not only in violence, but in the raising of anti-immigrant placards one of which, known as the ‘Dutch Church Libel’, was written in a blank verse parody of Marlowe’s work and signed ‘Tamburlaine’.

Whether it was because of his connection with Marlowe with whom he shared rooms for a time or under the suspicion that he had written the placards as scrivener is not known for certain, but fellow playwright Thomas Kyd was arrested in connection with the Dutch Church Libel. In a search of his rooms allegedly heretical writings were discovered. Under torture Kyd maintained the papers were Marlowe’s who was then summoned before the Privy Council. Marlowe was out of London at the time and was fetched from Scadbury in Kent where he was staying with his friend and patron Thomas Walsingham, a cousin of Sir Francis and a presumed secret agent. He was questioned by the Privy Council but set free under licence.

Meanwhile, an incriminating report had been put before the Privy Council accusing Marlowe of sedition, atheism and homosexuality. It had been written by Richard Baines, one of Marlowe’s erstwhile fellow spies, most likely at the behest of an as yet unidentified but powerful enemy. On May 30, 1593, Marlowe spent a day in Deptford with three other men, at the end of which he was reported dead after a fight with one of his companions over the bill. Malicious rumours about his death drifted back to London so that it was generally believed he was killed in a tavern brawl over a rent-boy. (see A Fateful Day in Deptford)

It was not until 1925 that the original coroner’s report into Marlowe’s death was discovered. This gives a very different picture of the incident which has led many of Marlowe’s admirers, the Marlovians, to believe that Marlowe’s death was staged so that he might escape torture or execution at the hands of the Privy Council.

As Shakespeare’s name did not appear in print until after Marlowe’s disappearance, many Marlovians also believe that it was Marlowe who wrote the Shakespearean canon, that after his escape to Europe, Marlowe continued to write plays which he sent back to England through Thomas Walsingham to be staged under Shakespeare’s name. Implausible as this claim might be, both Marlovian and Shakespearean scholars recognise Shakespeare’s debt to Marlowe who pioneered the blank verse style in which Shakespeare wrote. Some of the early plays such as Titus Andronicus have been attributed to Marlowe in the past and the establishement has finally acknowledged what some critics have claimed for many years, that Marlowe co-authored the Three Parts of Henry VI. When and if they met, the two men would have been struck by the close parallels yet wide divergences between their lives.

Both playwrights were born in 1564 only two months apart, Marlowe in February and Shakespeare in April. Both were their parents’ eldest surviving son and one of several siblings. Both had a father called John in the leather trades, Marlowe’s as a shoemaker, Shakespeare’s as a glover. Both fathers were men of energy, holding elected office in their guilds and towns, yet both were somewhat frustrated in their ambitions. However, despite these parallels their sons’ lives were very different.

John Shakespeare’s ambitions took him out of his native village Snitterfield, but only as far as the nearest market town Stratford-upon-Avon with its limited social circle and one-room grammar school. John Marlowe’s ambition took him from his village near Faversham in Kent ten miles down the road to the cosmopolitan city of Canterbury, a city of both economic and ecclesiastic importance, where young Christopher had access to the historic cathedral, to immigrants from all over Europe, particularly French Huguenots, and most importantly, to the cathedral school, King’s School, and through it to Cambridge University.

Marlowe’s trajectory gave him another advantage over Shakespeare. Not only was his attendance recorded at the King’s School and Corpus Christi at Cambridge, but as a university graduate he entered a circle of literate men who wrote with, to and about each other. His various brushes with government and the law have also left a document trail. His theatrical partner, Edward Alleyn, was a man with an eye to posterity, whose papers are preserved at Dulwich College. So while William Shakespeare has left us with a dearth of evidence, which has led to all manner of speculation about his life and doubts about his authorship of the plays, Marlowe left us with enough documentary evidence to ensure that his life and works, while overshadowed by Shakespeare’s, would not be lost entirely to posterity.

Yet for all his advantages, history has not treated Marlowe as well as Shakespeare. While Shakespeare and his plays have always held a central role in the English psyche and culture down the ages, Marlowe and his plays were all but forgotten until the early twentieth century. This can be attributed in large part to their publishing histories. The publication of Shakespeare’s complete canon in the First Folio ensured the making and preservation of his reputation. Even the survival of quarto editions of his plays might be attributed to their later inclusion in the Folio.

However, no such compendium was created for Marlowe, so there is no definitive list of his works nor authorised texts of his plays. Only a handful of poems, a few translations and half a dozen plays have survived to be attributed to him. We can never know how much has been lost or misattributed. However, those half-dozen plays have left us with no doubt of his genius and the importance of his contribution to the flowering of Elizabethan drama.