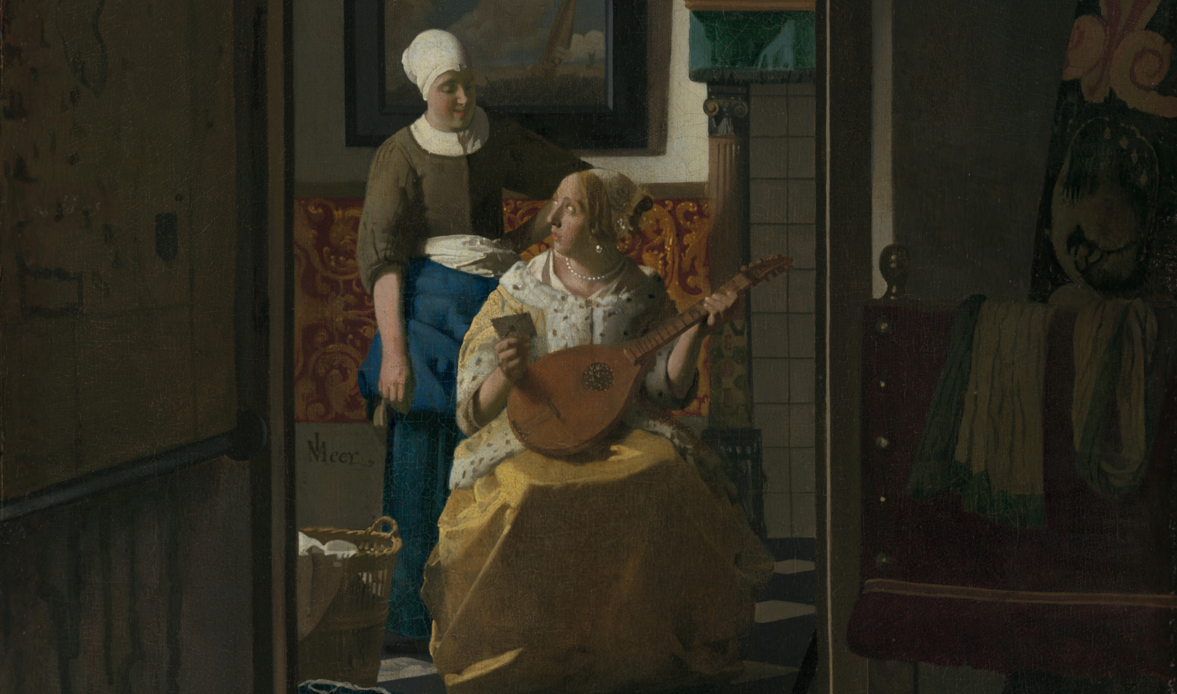 Great art can give us an insight into the past and inspire historical fiction.

Here in Australia, far away as we are from the sources of our European heritage, nothing is more popular than an exhibition of Dutch Masters of which we have had a few in recent years. The centrepiece of the last such exhibition was The Love Letter by Johannes Vermeer and what a joy it was to be able to stand close to that picture and study every fine detail. But if we are to judge by the recent spate of historical novels inspired by seventeenth century Dutch painting, it is not only Australians who are so fascinated.

Spoiler alerts: this study goes in depth in to the novels’ plots.

Probably the most acclaimed of these novels is Girl with a Pearl Earring by Tracy Chevalier (1999), the imagined story behind the celebrated painting by Johannes Vermeer.

Chevalier has delved inside the mind of the lovely, wide-eyed girl that looks at us so poignantly as she emerges from a shadowy background. From the sad eyes, yet sensuous lips; from the sidelong glance, yet modestly covered hair; from the endurance, yet vulnerability glimpsed in the unnamed girl, she has created Griet, a young maid employed by the Vermeers. Working from the few known facts about Vermeer, Chevalier has constructed around Griet a living household, an ever-growing family in a cramped house, rife with suppressed tensions, at the centre of which is Vermeer, as distant and inscrutable as his paintings.

The relationship that grows between Vermeer and Griet is also as delicately rendered, as difficult to define, as one of his paintings. There is an undeniable sexual tension between them, however the attraction is not based on lust, but on a mutual artistic vision which Vermeer recognises in Griet the first time he sees her and notices how she has arranged the vegetables she is slicing for her family’s modest meal. He cultivates her gift, employing her in his studio to prepare his colours and assist him, and thus they grow into a close, yet never intimate relationship.

However, neither Vermeer nor Griet is free to follow their own bent. Vermeer must sell his paintings to rich patrons in order to support his expanding family, and Griet must keep her place in order to bring some money into her own impoverished family. Thus neither of them can afford to refuse Vermeer’s patron his demand for a painting of the little, wide-eyed maid he lusts after.

This novel is beautifully written and constructed. The characters, their relationships and their environment are exquisitely drawn. All are believable and satisfying. This is a novel which stands on its own merits, yet at the same time the experience is not complete without seeing the film. (Directed by Peter Webber, written by Olivia Hetreed, shot by Eduardo Serra, designed by Ben van Os.)

It is not often that a film can equal the book it is based on, but this one does and in some points excels it. Chevalier herself has admitted that there is at least one scene in the film she wishes she had put in the book. And the film has the advantage of being a visual medium as is the subject of the story — every scene in the film has the feel of a Dutch Master, every interior set-up is a Dutch Interior come alive, and is as exquisitely beautiful.

Perhaps it was the success of Chevalier’s book that prompted the publishers of Deborah Moggach’s Tulip Fever (2001) to take the unprecedented step of including colour reproductions of Dutch paintings in the novel, thus allowing us to see, as well as imagine, the world in which her characters live.

Also the story of the relationship between a painter, albeit a fictional one, and his subject, Tulip Fever has the added element of the Dutch ‘Tulip Mania’ of the 1630s, the earliest commodity driven boom and bust.

Sophia is the unhappy young wife of Cornelis, a middle-aged merchant. To show off his social status, Cornelis commissions Jan to paint their portrait. Predictably Jan and Sophia embark on an affaire. With the help of her maid, Maria, Sophia hatches an audacious plot so she can run away with her lover. However, as soon as she and Jan decide to dabble in the tulip market to finance their escape, they are inevitably doomed.

Moggach aims at a lucid, literary style in Tulip Fever and succeeds, however the characters are too shallow and the plot too clichéd for the novel to have any real substance or resonance.

Another writer who has turned to Dutch painting for inspiration is Gregory Maguire in Confessions of an Ugly Stepsister (2000). Maguire piles into this novel a painter, his subject, ‘Tulip mania’ and the inevitable collapse, as well as, as can be seen from the title, a retelling of the Cinderella story. He even throws in Marie de Medici for good measure.

Iris, her simple-minded sister, Ruth, and their mother, Margarethe, escaping from persecution in England, arrive in Margarethe’s ancestral hometown in Holland. Destitute, they are taken in by the Master, a gruff painter who sees the makings of an artist in Iris. Margarethe finds work as a housekeeper for Cornelius, a rich merchant, who has a beautiful but odd daughter, Clara. When Clara’s mother dies, Margarethe marries her employer, thus becoming the requisite stepmother. However, it is not Margarethe who relegates Clara to the kitchen, but Clara herself who retreats there.

Meanwhile Iris has started working for the Master and becomes his unofficial apprentice. While Cornelius is doing well in the tulip market, he commissions the Master to paint a picture of his daughter with a valuable tulip. The picture is meant to be an advertisement for his wares. However, Cornelius loses his fortune in the inevitable crash and Margarethe invests everything they have left into sending Clara to the ball being held by Marie de Medici to find a wife for her godson, who is no romantic hero.

For a novel based on a fairy story, Confessions of an Ugly Stepsister is bereft of beauty, romance or joy. In fact, the book is an unpleasant read — none of the characters is particularly likeable, it is hard to have any sympathy for Clara, even when we do find out her terrible secret, and the ending leaves little hope for happiness.

Maguire also jars by attempting to take an anachronistic feminist line, re-writing seventeenth century Holland as a modern American believes it should have been. In comparison, both Girl with a Pearl Earring and Tulip Fever, in showing how women were actually oppressed at the time, make a much stronger feminist statement.

Of these three novels, Girl with a Pearl Earring is by far the superior. The others try to emulate it but cannot succeed.