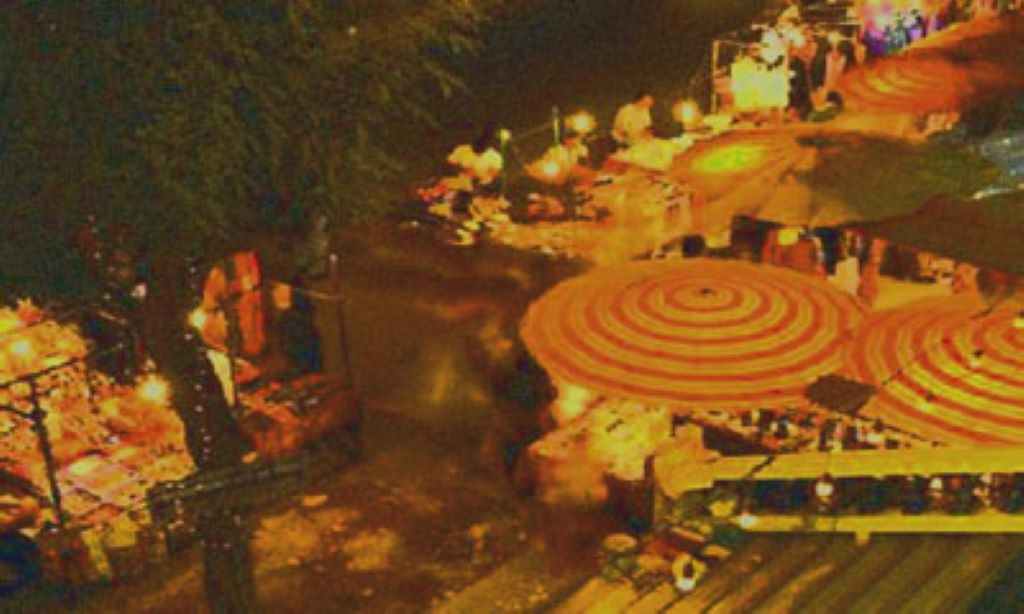 A blind date comes to a surprising conclusion.

A whiff of coriander wafts from the restaurant ventilator. Its clear heady smell combines with car fumes and oil frying. The night market in Chiang Mai. No, not tonight. I should never have agreed to meet in a Thai restaurant, should have known there would be too many associations.

The appointment is for seven-thirty and I’m already late. Four changes of clothes are strewn across my bed, a talisman against any suggestion of going back to my place. It’s taken three phone calls to get to this point, calls I made sure not to let go on for too long. I’ve learnt to leave something to say at that crucial first meeting, first and last, usually.

The restaurant is nearly empty. More waiters than diners. Bad sign maybe, except that it’s a Tuesday night. There’s only one man sitting alone, facing the door, anxiously waiting. He’s a big draught horse of a man, just as I should expect from the phone calls, slow and dull. I can tell already this is a mistake. The others sounded interesting over the phone but turned out to be boring. I was hoping this one might turn out the other way round. Maybe I should just go home, but it’s too late. He’s seen me and half rises in his chair. Courtesy, or a desire to run?

A young waiter with those familiar almond eyes, sharp cheekbones and golden skin greets me at the door. ‘Sawaddi khrap.’

He has a smile that pierces my heart with painful memories. My ‘Sawaddi kha’ in reply catches on the frog in my throat. I give my date’s name, hoping it isn’t him, but the waiter leads me straight to him.

He stands properly now and tries to smile at me. I can see it’ll be up to me tonight to play mother and put him at his ease. This is the first time he’s done this he’s told me, but my ad inspired him. Him and twenty-three others. This one is number seventeen and it looks like I’m getting to the bottom of the barrel.

Time to make conversation. ‘I hope you like Thai food.’

‘It’s a bit hot for me. But…but it’s always good to try something new, isn’t it?’

Not necessarily. I could have stayed home and watched The Bill instead. ‘We can make sure we order something mild. The salads are good.’

The waiter comes back with the menus.

‘Khorp khun kha,’ I say, trying not to be drawn into those eyes.

He smiles a conspiratorial smile. ‘Khrap,’ he replies.

We sit in prolonged silence as my date frowns at the menu and I try to follow my Aunt Norma’s instructions and let him take the lead. Finally I suggest a few dishes. Grateful, he lets me place the order.

Please. Not this subject. How many singles nights have I been to where the only topic of conversation is being single? I can’t help myself. ‘I don’t know. It’s a good place to go if you want to get laid.’

Have I shocked him? Good, maybe he’ll stay clear of the subject, but instead he rises to the challenge. ‘But there’s more to life than that, isn’t there?’

The waiter returns with a jug of ice water and fills my glass.

The waiter replies in Thai, but I’ve exhausted my vocabulary.

He smiles. ‘Mai pen rai khrap,’ he reassures me.

My date is wide eyed. ‘You speak Thai.’

‘Just a few words. I’ve been there a couple of times.’

I’d like to avoid this subject, too, but it’s too late now. ‘No. Chiang Mai mainly.’

My hackles rise. ‘Is that all you went for?’

I take a draught of water and try to calm down. We haven’t even had the first course and if I’m not careful he’ll cut and run even before it comes.

Bravely, he tries to make the best of it. ‘So what do you do there? In Thailand?’

Can we please get off this subject! ‘Travel. See friends.’

He keeps trying. ‘Been there lately?’

Thankfully, I see our first course arriving. The food gives us something to do for a while besides talk.

As the plates are cleared I endeavour to make conversation again. We can’t sit silent through the next course as well. ‘You’re originally from Warracknabeal then? How do you like Melbourne?’

With some prompting I finally get him talking about himself. Relieved of the burden for a while, I find my attention wandering. Waves of memory waft through me like the aromas of Tom Yum and Green Curry coming from the kitchen. His hand stretched out to help me along a log bridge over a fast running stream. Clinging to him as we climb a hillside on a motorbike. His proud boast to his friends that I’ve tried the worms and insects at the jungle food restaurant. His strong arm around my waist as he steers me through the explosive mayhem of Loy Krathong. The hushed coolness as I watch him bow to a serene Buddha. His smooth golden body in the ceiling mirror of the ‘Love Hotel’. The one request he ever made of me that I couldn’t bring myself to grant.

‘Do you want some more?’ my date offers.

The waiters are watching, bemused, as the big farang shovels down the food.

‘These Thai friends of yours. How did you meet them?’ he asks as we wait for the plates to be taken away.

Please, no more. ‘He’s the tour guide who took me on a hill-tribe trek. And his family.’

He raises an eyebrow. ‘Your tour guide, ha?’

I’m used to this reaction. ‘Yes. My tour guide.’

The waiter comes to clear the table and I ask for tea. It comes immediately and we drink it in silence.

Finally, my date leans forward. ‘Look. You’re a nice lady and everything. But I don’t think we’re suited. What do you think?’

‘Yeah, well, you’ve been a bit distracted, haven’t you?’ He looks at me intently. ‘Look, if you don’t mind my saying so, I get the impression that you’re not really enjoying this much.’

I look at him properly for the first time. There is a depth to his eyes I haven’t noticed before. ‘No, not really.’

‘Then why are you doing it?’

Why? Because I’ve been persuaded it’s the sensible thing to do. ‘I’m thirty-four and all alone. And I don’t like hanging out in bars either.’

He looks at me quizzically. ‘Can I ask you a personal question? You don’t have to answer if you don’t want to.’

‘I’ve seen the way you look at that waiter.’

I must be flashing indignation.

‘Hey, I’m not saying you’ve been flirting or anything. It’s more like…more like he reminds you of someone…someone you miss. Is it this Thai friend of yours?’

I look across to the waiter. He’s chatting with a young waitress, slim and demure in her Thai costume. I feel a stab of jealous longing. Tears sting my eyes and I fight them back. My date is watching me sympathetically. ‘Can I ask you something?’

‘Say you meet someone, in another country? Someone much younger than you.’

‘Someone who doesn’t have much money.’

‘But you’re not doing too badly yourself, so you try to help him out, him and his family.’

I look for a reaction, but he’s listening impassively.

‘And all your friends, they say you’re being a fool. That they’re just milking the rich farang lady.’

I shrug again. But I remember the look he gave me, a look I thought held affection and gratitude, when we were planning to get his father’s old jeep fixed up so he could set up a tour company of his own.

‘And then, what if he asks you…?’ I falter. I’ve never told this to anyone.

‘What if he asks you to marry him?’

He takes a deep breath and frowns. ‘Well, I guess you’d think he was just after you for your money, or to get to Australia.’

That’s what I expect him to say. I look away. The waiter is showing a smiling young couple to a table across the room.

My date leans across the table. ‘But, if you know that, and you still like the bloke, why not? It’s the sort of thing you’d do for a mate. People get married for a lot worse reasons.’

I swill the dregs of my tea around the cup. The waiter sees and rushes to refill it. I cannot meet his eye this time.

‘I said…I said maybe I was getting too old to get married.’

He smiles the smile of a wise old priest. ‘That’s what you’re afraid of, is it? That you’ll get him out here and all, and then he’ll run off with someone younger?’

‘How has he treated you so far? It can’t be too bad if you keep going back.’

I’m a bit embarrassed to say this. ‘He treats me like I’ve always dreamt a lover would.’

He laughs. ‘Who’d want to go to bed with that cold fish? Like I said, you’re a nice lady and you’ve treated this bloke like a prince. How do you know he doesn’t feel about you the same way you feel about him?’

‘We can’t be sure about anything in this life. You just have to suck it and see.’

‘Look, what’ve you got to lose? What’re you going to do instead? You can answer ads and go to singles clubs and bars all you like, but you’re never going to meet anyone else you like as much as him, are you?’

‘But my family, my friends. They’ll all say…’

Relief surges through me.

When I get home I check the clock. Chiang Mai is three hours behind. He’ll still be up. I wonder how soon I can get on a plane.