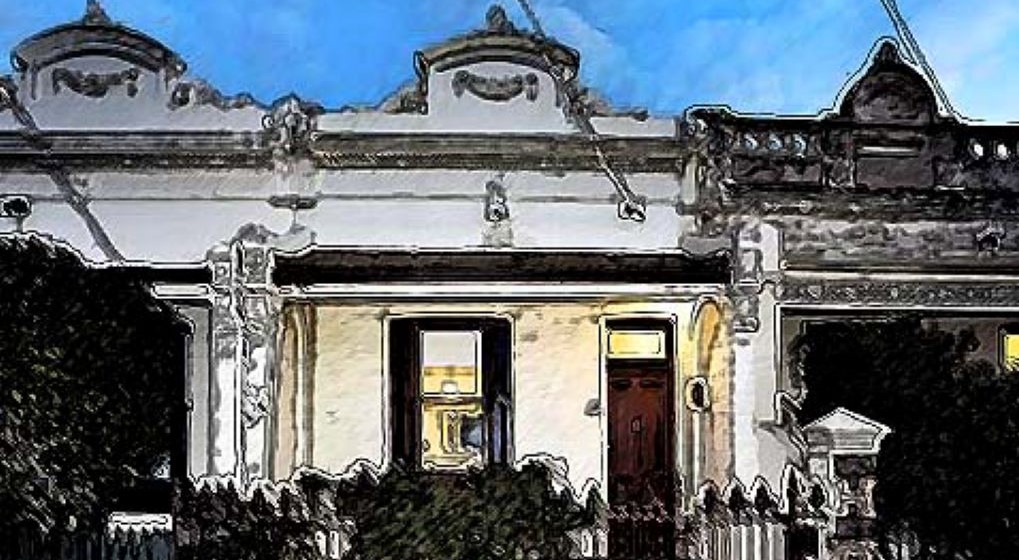 It was a mundane interview for a mundane story, but it would draw him deep into the darkness.

The dreamer woke with a jolt, sweating, heart pounding. He turned, folded up and groaned. ‘Haven’t had enough.’ He got up, had some more and sank into the darkness.

A trill-trill dragged him out of the darkness. He picked up the phone.

No point in answering.

‘Why do you do this every anniversary?’

A voice rasping and hard. ‘What anniversary?’

The phone slammed in his ear. He got up, had some more and sank back into the darkness.

Well after eleven, Michael Gallagher, head aching, mouth dry, walked into the barnlike offices of the Suburban Newspaper Group. He ignored the eyes that followed him as he made his way between the straight rows of desks to his own cubicle, computer screen covered in post-it notes. A young male voice called, ‘Good afternoon, Mick. We can call off the missing persons squad now, can we?’ Someone hissed at him to shut up.

The editor came to his desk as Mick was taking off his coat. Mick nodded a greeting but didn’t need to look into his old friend’s eyes to see the reproach there.

He handed Mick a handwritten note. ‘Woman says her neighbour’s renovations are cracking her walls.’

Mick groaned. ‘Come on, Harry. Give us a break.’

Harry turned back, his voice a terse whisper. ‘This is your break, mate. I’ve got to justify your salary and old times’ sake’s not good enough.’ He gritted his teeth, breathed, put a hand on Mick’s shoulder then walked away.

Mick stood for a while, studying the note. When the office clatter had returned to normal, he put his coat back on and walked out.

Number 18 was in the centre of a row of single-storey terrace houses that had been built to house labourers and their large families a hundred years ago, but had since become the homes of childless professionals. Like most of its neighbours the house had recently been painted a pastel colour and the bull-nosed corrugated iron veranda had been renewed. He could imagine the muted walls, shiny floorboards and bright skylights within.

Number 16 looked like it was in the middle of getting its makeover. The old veranda had been pulled down. Large patches of the paintwork had been scrubbed off and the front window was boarded up. Usually houses in this state sported a hoarding advertising the name of the builder at work within, but this one carried none.

Mick rang the bell of Number 18. The woman who answered was probably just into her forties with black curly hair and a well-rounded figure. Laugh lines around her deep brown eyes spoke of experience and a wide mouth of sensuality. Mick found himself giving her the charming smile he reserved for women he wanted to know better.

He handed her his card. ‘Mick Gallagher. Suburban Newspaper Group. You gave us a call.’

‘Yes, yes, come in.’ He followed her into the hall. ‘Look.’ She pointed to a crack that started at the cornice and ran almost to the floor. Mick’s eye followed the curve of her arm.

He found her watching him, a smile playing about her lips. ‘It starts here and goes all the way down here.’ She gestured with her head for him to follow her. He did, willingly.

They passed several other cracks. She paused just before the door into the living-room to point out one that climbed up the wall and crossed the ceiling.

Mick rested a shoulder against the wall next to her. ‘Have you spoken to the builder…Ms Polites?’

‘Sophie…’ She went into the living room and perched on the arm of the couch.

Mick followed her in, tried not to look at her shapely legs.

‘I tried to, but he pretended he couldn’t understand me. He was Vietnamese or Chinese. Anyway, I haven’t seen him for weeks. I tried the Council. They keep saying they’ll send someone out.’ She smiled.

He smiled back for a moment before remembering what came next. He pulled a notebook from his back pocket. ‘Right, let me get this down.’

‘Please, take a seat.’ He sat at her dining table and wrote a few notes, conscious of her sitting opposite him. He looked up to see her studying his card.

‘Michael Gallagher? Didn’t you have a column in The…?’

He cut her off. ‘That was another bloke.’

She studied his face gravely. He wrote a few more notes.

‘How long would you say it’s been since work stopped next-door?’ he asked.

She thought for a moment. ‘Six weeks. I remember he didn’t come back after the Queen’s Birthday weekend.’

‘And there’s been no one there since?’

‘Not entirely. I think squatters have moved in. At night I can hear noises, a muffled banging sometimes and someone crying.’

He looked up from his notebook, wondering about her sanity.

She looked back at him squarely. ‘There are a lot of drug addicts in the area.’

He nodded. ‘Is there any way we can see in next-door?’

She got up and led him through the sliding glass door at the end of the room into the tiny backyard which shared about a metre length of fence with Number 16. It was the blank side. She brought out a domestic stepladder from the laundry.

Number 16 was a renovator’s heartbreak. The weatherboard extension at the back of the house had fallen in on itself and was precariously poised over a large hole that had swallowed up half the backyard. The collapse had exposed a door into the original brick structure. It was padlocked. Mick climbed over the fence and dropped into the yard while Sophie went to get a torch for him. She climbed up the ladder to hand it to him and stayed to watch.

Mick slid down into the hole. He wondered if the builder had stumbled across a rudimentary cantina dug by one of the European residents of earlier days. The soil was damp and cool to the touch and smelled dank and rotten. He squatted to shine the torch under the house. The hole seemed to have no end. It disappeared into darkness that extended well under the older part of the house. As he played the torchlight over the darkness to gauge its extent, the weak shaft suddenly lit up a fragment of bright yellow.

A rat scurried out from under the house and across his foot. Mick shot to his feet. The rat scrambled up the side of the hole as a cat screeched and pounced on it from above. The rat twisted itself free and scuttled under the back gate. The cat climbed up the opposite fence, ran across its top and jumped down into the laneway after it.

Mick climbed up to her. ‘I reckon we’ve found your squatters.’

‘I think I’d prefer the drug addicts.’ She reached out and wiped sweat from between his eyebrows with her thumb. ‘You don’t like rats?’ Her touch was warm.

Mick woke up. Waited for his heart to slow down. Got up and found the whisky bottle. Poured half a glass and tossed it down. Wished a dark-haired, sensuous figure was there to entice him back to bed. Sat up all night with the bottle instead.

It only took a quick title search to find the owner of Number 16. Mick got him on the phone. He was wary of talking at first, but his anger couldn’t be held back.

‘Look, mate, if you can find the little bastard, I’d be grateful. I’ve been after him for weeks myself, but I can’t find him anywhere. He only gave me a business address. He hasn’t been there for ages and no one can tell me anything. His mobile’s not answering either. And I can’t even get into my own property. He’s padlocked it all up and taken the key.’

‘Have you tried finding his home address?’

‘Yeah, sure. His name’s Nguyen. Where do I start?’

Mick almost laughed aloud. The last time he’d checked there were eight pages of Nguyens in the phone book.

‘What can you tell me about the previous owners?’

‘Nothing much. The house hadn’t been lived in for years. A deceased estate and a disputed will. Look, tell the woman to put in a claim. My insurance will fix it.’

Another quick title search found Mr Nguyen’s landlord. Mr Nguyen’s business premises, the back corner of an old warehouse, were sublet for cash on a week-to-week basis. Another dead end, but he had something to take back to Sophie.

Yellow. Yellow and fear. Suffocating fear. A rat running across his face. Small fists pounding. A cry. He had to find him. If only he could find him.

Sophie shook him awake. She lay next to him, her warm hand over his heart slowing it down.

‘Who’s Kieran?’ she asked when he was calm.

He looked into the darkness beyond the soft glow of the bedside lamp. ‘My son.’

‘What happened to him?’

‘I don’t know. And sometimes I don’t want to know.’

Sophie took him into her arms and let him cry.

Later, as he was coming back from the bathroom, he found Sophie crouched by the wall of the corridor.

‘Listen. The noises next door. It’s not a cat.’

He pressed an ear against the wall. He could hear a pounding. An irregular beat in uneven groups, like someone knocking fruitlessly on a door. And then a cry. Was it human? Was it his imagination that heard words in it?

He pulled away from the wall, cold and sweating.

Sophie’s hand was on his shoulder. ‘Are you all right?’

He shook his head. ‘I’m going in there.’

‘I’ll get the tyre iron from the car.’

In the grey pre-dawn light, he dropped into the backyard keeping out of the hole by the weak light of the torch. It took only a few vigorous kicks to clear the debris from around the door. The hinge pulled away easily from the dried-out wood and he was in.

Keeping close to the wall he inched into the room then stopped. The faint light from the open door barely breached the darkness within. The noises had stopped. The only pounding he could hear was his own heart. He could not breathe but the room seemed to be breathing for him, around him, as though he had been swallowed by it, by the fear.

He lifted the torch, as heavy as iron, and measured out the walls of the room. A large room, two rooms made into one, he guessed, the windows boarded up. He forced his hand to sweep the torchlight across the floor until he found the place where the floorboards had been lifted and returned awry.

He stood still a moment longer, gathering strength, pulling air into his lungs. Then he stepped forward, slowly, testing each floorboard, eased himself down beside the loose boards. As he reached a hand out, he realised he still held the tyre iron in white knuckles. He put it down to gently lift the first board.

Yellow. His favourite Wiggle. The skivvy he’d been wearing on the school excursion, the day his mother and father were too busy to go with him.

He dropped the board, folded up in pain.

When the sobs stopped, he knew he had to go on, had to know, had to see. He put the torch aside and lifted the board again, and then one by one all the others, his eyes averted until they were all off. Then he picked up the torch and let it find the yellow again.

Down first. No trousers or underpants. Flesh brown and desiccated. Socks. One shoe. Knees bent, collapsed on each other. Then up. Skeletal arms raised, hands fallen on the face. Mouth open, screaming silently.

His paralysed hand dropped the torch and he descended deep into the darkness.