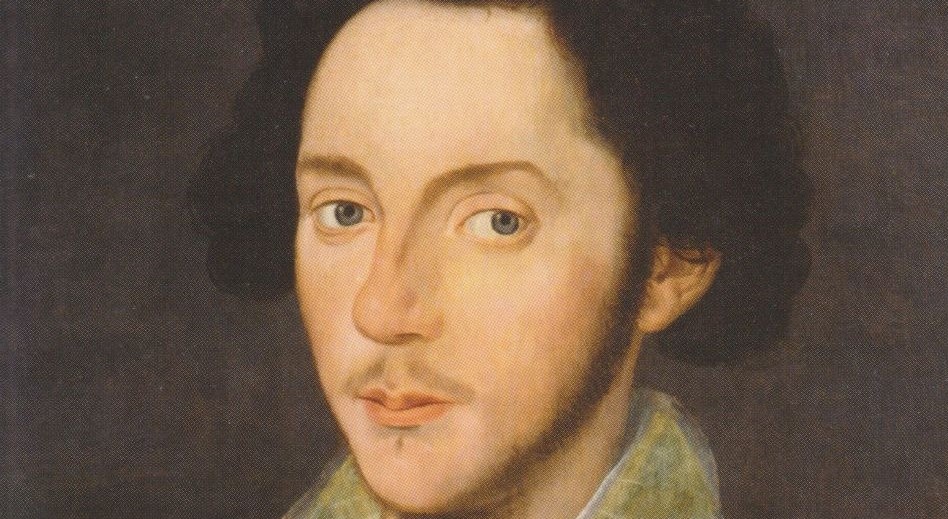 There are many portraits that purport to be of Shakespeare. The evidence for the Grafton Portrait is perhaps no stronger than for any other, but the young man in this picture could only be a poet.

Is this painting of a sensitive, intelligent but diffident young man an early portrait of William Shakespeare?

The Grafton Portrait, named after the village in Northamptonshire in which it was discovered, now resides in the John Rylands Library at Manchester University. As there is no clear proof that this is Shakespeare, the university makes no such claim, but there is enough circumstantial evidence to make it not only possible, but highly probable.

The young man’s face bears a close resemblance in looks and proportions to the only official portrait of Shakespeare, the frontispiece of the First Folio. Add a few years and a few pounds and it could also be a younger version of the man portrayed in the Chandos Portrait in the National Portrait Gallery.

The painting is dated 1588 and the sitter’s age is given as 24 which was Shakespeare’s age in that year. Furthermore, Grafton is close to the town of Abington where his granddaughter Elizabeth, who inherited her grandfather’s possessions, lived and died. As she died childless it is possible her possessions were sold or passed onto friends in the area. The last known owners of the portrait cited a family tradition that it was given to one of their ancestors by the Duke of Grafton.

However, in 2005 the painting was carefully restored and examined when it was included in the Searching for Shakespeare exhibition held by the National Portrait Gallery. At the time it was widely reported that the portrait had been proven to be a fake, causing the University of Manchester to all but repudiate the painting. However, the evidence for such a counter claim was even more tenuous.

Scientific examination demonstrated that the painting was definitely English from the late sixteenth century, although the artist could not be identified. Admittedly the sitter’s age had been changed from 23 to 24, but the change was made at the time the portrait was first painted and could simply mean the sitter celebrated a birthday before the painting was finished.

The strongest evidence cited for its being a fake is that the young Shakespeare, as the father of three children and still only a travelling player, could not possibly have been able to afford the silk and satin doublet the sitter is wearing. To my mind this is a rather spurious objection.

It was quite possible for the artist to enhance the quality of his sitter’s clothes if he so wished, but the explanation might be even more mundane. Shakespeare was an actor and at this time actors bought and maintained their own collection of costumes, often the cast-offs of rich noblemen. Even if he had not been able to afford such a sumptuous doublet himself, wanting to look his best for the portrait, Shakespeare could easily have borrowed it from one of his fellow actors. In fact, if we look carefully at the doublet’s fit, does it not seem to be a bit wide across the shoulders?

And then, of course, the question must also be asked, could he afford to have his portrait taken at all? Perhaps he did not need to pay for it. After all, his closest friend, Richard Burbage, was known to dabble in portrait painting.

So, in essence, we have as little evidence now as we have ever had for whether this is or is not the young William Shakespeare. However, that melancholy expression and dreamy grey eyes could only be those of a poet.