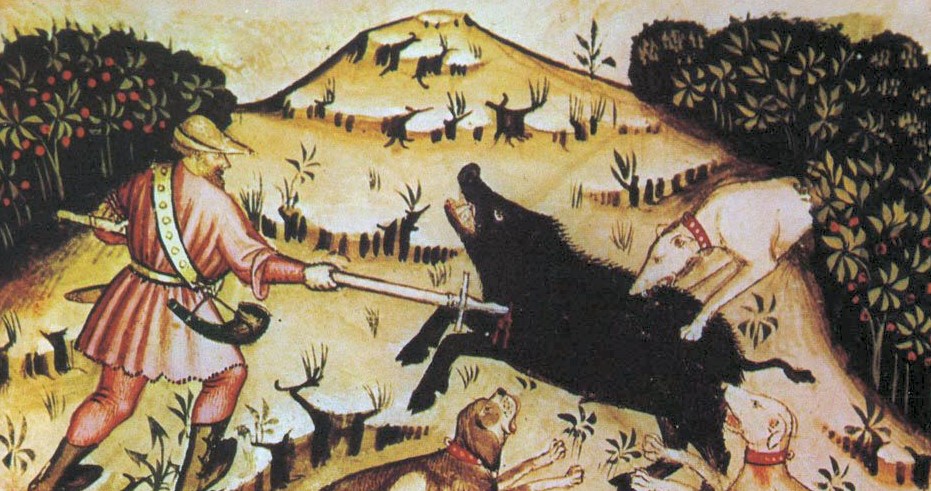 Hunting in all forms was popular in Medieval Italy, especially amongst the aristocracy.

Italians have always loved hunting or la caccia. It’s the reason why one sees so few birds in Italy these days apart from the ubiquitous pigeon, though there was a time when Italian hunters disdained such small fry. Their quarries of choice in the Middle Ages were the hart and the boar.

Hunting was not just about the meat, or even the sport. It was about the exercise, about keeping men in trim and in form for war. It was also a social occasion, preceded and followed by good food, wine and jollity, by boastful arguments about one’s exploits and the joyful consumption of the kill with one’s family, peers and dependents. And, with the symbolic linking of the hunt with seduction, it provided a thrilling setting for amorous dalliance.

Each type of prey had its season. The boar was hunted in winter, from September to February, the hart in summer, from June to September, the fox in spring, from March to June. The hare was also hunted in spring from March to April, though in some parts there was no closed season on this small but fast and wily animal, ideal for keeping one’s hand in during the off-season. In the remote hills, bear might be hunted when the snows had cleared, from May to December, while the wolf might be chased down all through the winter months from September to March.

The larger beasts of prey were hunted ‘par force’, with hounds and horses. A variety of hounds were used such as the swift-footed greyhound, the burly little running hound, the handsome, smooth-coated alaunt and the huge mastiff. Smaller prey and birds might be hunted with the aid of tamed falcons and hawks.

The hart, a mature male deer, was the largest prey to be hunted. This elegant animal could be gentle, timid and wily, yet with its broad spread of antlers could easily kill a hound or a man. Once the hounds had been loosed to follow the scent, the hunters would set off in pursuit, the beaters on foot, the lords in the saddle, listening for the baying of the hounds far ahead of them and the bellow of the horn that would signal when the hart was sighted, chased over field and through forest, and then held at bay by the hounds.

This was perhaps the most dangerous moment, when the great beast, worn down and desperate, might use its waning strength to turn on man and dogs. Yet the hunters would hold their hounds back, for it was only the lord himself who had the privilege of killing the noble beast, bringing him down, perhaps with an arrow, before finishing him off with a sword through the heart.

Then once more the horns would be sounded to signal the kill. The lord would turn up his sleeves to ceremoniously begin butchering the hart, rewarding the hounds with offal or bread mixed with blood. The dead beast would be carried home with great fanfare, offered to the women of the family as the spoils of manly exploits.

But by far the most dangerous prey was the boar. This massive, ugly beast was generally black, with wide malevolent eyes, its mouth horrific with bristles and teeth, flanked by curved, gleaming tusks. Though not as subtle and evasive as the hart, the boar was fearless, impervious to pain, could call on boundless stamina and unrelenting ferocity and was capable of bringing down a horse as easily as a man or a hound.

A boar could be found rooting about for fruit in an orchard or acorns in a forest. More often than not it would turn on the dogs that found it, attacking them repeatedly before turning to run so hard and long that relays of fresh hounds would be needed to keep up with it. Once it was cornered, both hunter and horse would need the utmost courage and dexterity to approach it. Quick reflexes and calmness were essential as the hunter watched the boar’s eyes to predict its movements before lunging with sword or spear. Miss and the boar could kill them both.

Falconry enjoyed a revival in fourteenth century Italy. In this sport the hunter could develop a personal relationship with his hawk, getting involved in the raptor’s taming and training, flying with it in spirit as it left his arm and soared, free and independent, swiftly and deftly bringing down its prey. Hawks were used to hunt small game such as rabbits and hares, low-flying land birds such as partridges and pheasant, as well as aquatic birds such as ducks and herons. Dogs might also be brought along to retrieve the larger game.

Falconry was one form of hunting in which ladies could indulge, carrying their own smaller raptor such as a falcon, into the field. Although it was rare, women might also participate in hunting ‘par force’, though they would be restricted to riding on the new-fangled side saddle and, of course, be expected to watch the kill from afar.

The hound and the hawk: the art of medieval hunting by John Cummins (1988)