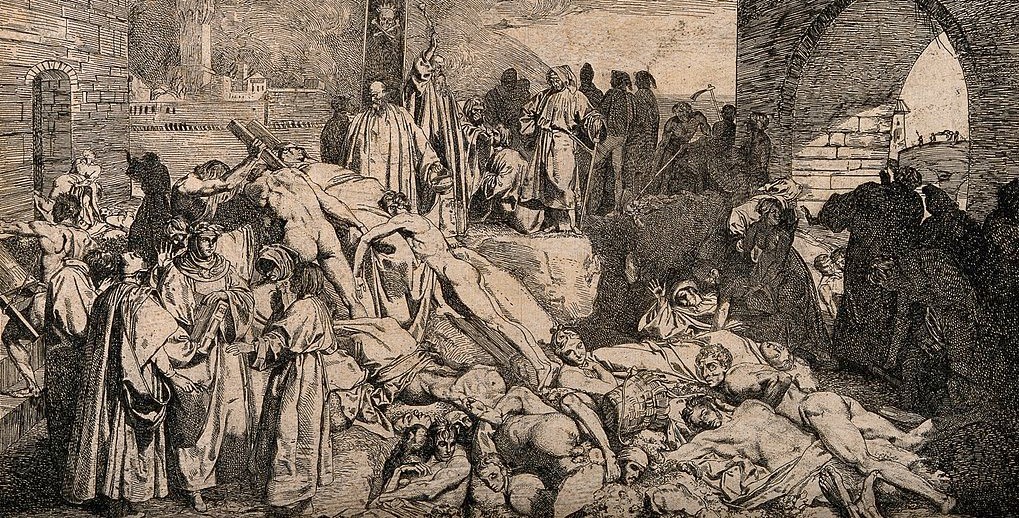 The Black Death entered Europe through Italy where it brought with it utter devastation.

The Black Death arrived in Italy by sea, first making landfall in Sicily in early October, 1347. By January 1348 it had landed in Venice and Genoa. A few weeks later it appeared in Pisa and from this foothold it moved rapidly inland, east through Tuscany and south to Rome. By the time it died down in the winter of 1348 more than a third of Italy’s population had perished.

Horrendous as it was, the Black Death, or La Pestilenza, was only the crescendo of a series of calamities that had hit the peninsula in the previous few years. Earthquakes had left severe damage in Naples, Rome, Pisa, Bologna and Venice. In 1346 banks in Florence and Siena collapsed leading to unprecedented economic disaster. Six months of almost continuous rain in 1347 had made sowing of crops impossible and flooding had caused a breakdown in communications and transport. Food shortages ensued, bringing soaring prices and famine. Meanwhile, a series of local disputes between the city states embroiled much of the north in seemingly unending, bloody wars.

With its patchwork of city states (see Northern Italy in the Middle Ages), official reactions and precautions varied from place to place. In Florence, the streets were cleared of refuse and entry was forbidden to the sick. In Milan, all occupants of afflicted houses were walled up inside and left to perish. In Pistoia, any citizen who visited places where plague was rampant was forbidden to return. No linen, woollen goods or corpses could be brought into the city. But some towns hesitated to act. Orvieto’s town council remained silent about the plague, even when it was raging in not too distant Florence, as though, by pretending not to notice it, it would miraculously pass them by.

The people protected themselves as best they might. Those that could escaped the cities into the countryside where the death toll was slightly lower. Others walled themselves into their homes, hoping to isolate themselves from contagion. While the religious prayed and walked in procession, supplicating God for relief, others turned to drink and merriment to forget, perhaps raiding the cellars of the houses that lay open and abandoned, their occupants dead or in flight. But la Pestilenza was inescapable.

The plague seemed to come in two waves. The pneumonic form came first, bringing continuous fever and spitting of blood. Highly contagious, it could kill in three days or even a few hours. The second wave was the bubonic form with the characteristic, blood-filled buboes, which the Italians called gavòccioli, together with other symptoms, such as the dusky blotches of subcutaneous haemorrhages and the intoxication of the nervous system. In rare cases the buboes might break down and suppurate and the patient survive, but in general the victim would be dead within five days. The medical profession was helpless, unable to do more than advise a few rudimentary sanitary precautions, or relieve some of the symptoms, their own lives in constant peril.

Not only was the disease painful and infectious, it was also disgusting. Everything the sick body excreted, be it sweat, excrement, spittle or breath, exuded an overpowering stench. It was no wonder, then, that victims would be abandoned by all and left to fend for themselves. Their dead, or almost dead bodies, would be carried away by the becchini, the coffin bearers, recruited from the lowest of the low, and whose own lives ‘were not worth twenty-four hours’ purchase’. Corrupt and brutalised, they were known to extract bribes or female favours to prevent their carrying off the still-living.

The rich might be able to afford a funeral which would be followed by only a handful of people. More often than not, the priests leading the procession, on arriving at the church, would find three or four additional biers in their wake. The poor would leave their dead in the streets to be carried off on plain boards, two or three at a time, to be buried in communal pits. In the countryside, poor peasants collapsed in their scattered homes, by the wayside or in the fields, their animals and poultry running free, their crops abandoned.

With a death toll of up to 60% in some regions, the Black Death left radical change in its wake. Most commodities were scarce for a long period, their prices doubling as a result. At the same time, a lower population brought with it labour shortages and thus soaring wages. Those that could not find work turned to crime, so that more people carried arms. Unprotected orphans fell victim to mistreatment, sexual morality was flouted and the laws of inheritance ensured that the surviving rich accumulated even more wealth. And finally, communal government (see The Medieval Italian City State) which had already begun to give way to the rule of rich dynasties before the Black Death finally collapsed altogether, so that within a few years, almost all the city states had been taken over by one petty tyrant or another.

The Black Death by Philip Zeigler (1969)