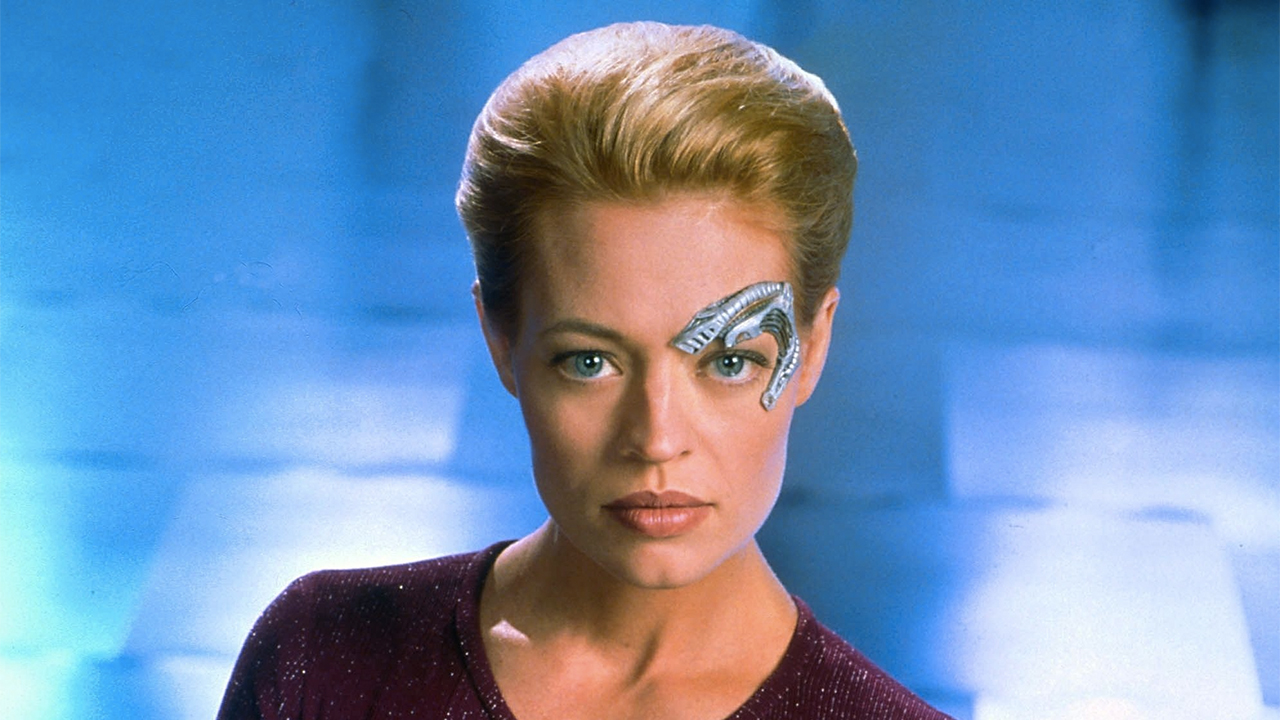 My personal response to the dearth of intimate relationships on Star Trek Voyager.

Harry hesitated for a moment at the door of the astrometrics lab. As the images on the screen moved and changed, their refracted light played over Seven’s magnificent figure. Although he had barely breathed, Seven’s enhanced hearing picked him up almost immediately. She turned and glanced at him before returning to her work.

‘Do you require my assistance, Ensign Kim?’

‘Ahm .. no, not really.’ He approached her cautiously. ‘I just came by to say hello.’

She looked at him briefly down her beautiful straight nose. ‘Hello, Mr Kim,’ she said in her usual monotone and turned back to the console.

Harry tried again. ‘So, how’s it going down here?’

Seven replied without taking her eyes from the screen. ‘Goes in what way?’

‘My work proceeds productively, thank you.’

‘If you mean “Do I gain satisfaction from my work?”, the answer is yes.’

‘Well, that’s great…great…And we all appreciate the work you’ve been doing in here.’

‘That is very gratifying, Mr Kim, but is this conversation leading anywhere? I have these calculations to complete for the Captain.’

Harry wiped his sweating palms on his trousers. ‘Ahm … Seven … you know how Neelix is holding a luau tonight?…In the holodeck? …Well, I was wondering if I could … escort you.’

‘Thank you, Mr Kim, but I am quite capable of getting to the holodeck on my own.’

‘Harry, you son of a gun, is this where you’ve been hiding?’

‘So, we’ve been sharing intimate moments with Seven, have we?’

Tom Paris might be his best friend, but there were times when Harry could throttle him.

‘I thought you’d gotten over her years ago!’

‘I did, I have … but, Tom, don’t you think she’s changed a lot since then … become more … approachable?’

‘You’re considering giving her another go, aren’t you? That’s what you’ve been doing in here, practising! Harry, please, don’t do this to yourself. You remember how you felt last time?’ 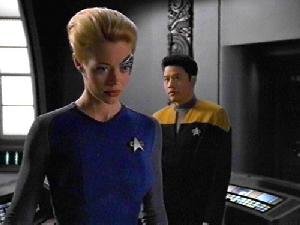 Harry sighed. ‘I know, Tom, but what’s a man supposed to do?’ He paced back and forth across the lab, and then stopped in front of Tom. ‘Look at me, Tom. I’m an alright looking guy, aren’t I? And I might not have your way with the ladies, but I’m not a total klutz.’

Tom was rather taken aback. ‘Of course, Harry, you’re a real attractive feller.’

‘We’ve been on this ship almost six years and I haven’t got lucky with one girl in the crew.’

‘It’s not as though you’ve never scored.’

‘Once, with an alien, and look where that got me. I started to glow in the dark and got ticked off by the Captain. Apart from that, the closest I’ve come were those weird Tauresians who just wanted to suck out my DNA.’

‘There’s no need to take it so personally. You’re not the only one in that position.’

‘No, Tom, that’s true. In fact, when you come to think about it, you and B’Elanna are the only ones on board that aren’t?’

Tom looked non-plussed for a moment. ‘Are we?’

‘Do you remember when we were first stranded out here, when we first realized how far we were from home? We thought we might have to become some kind of a generational ship. We even talked about it in one of our senior crew meetings: how people were likely to pair off and how we might need to turn one of the cargo bays into a nursery. But have we?’

‘She was conceived before we set out.’

‘Hey, Harry, remember that day when we ran into Crewman Wright in tears because the Captain had caught her necking with her boyfriend in the turbo lift.’

‘And what became of them?’

‘Nothing really. It sort of petered out.’

‘Like all the relationships on board. Neelix and Kes broke up for no apparent reason. And what about Chakotay and the Captain? We all thought there was something between them.’

For the first time Tom looked concerned. ‘Have you heard the latest about the Captain? It looks like she’s fallen for Michael Sullivan from Fair Haven.’

‘I noticed. But I thought you gave him a wife?’

‘The Captain deleted her and played around with his program. Now every time you go to Fair Haven he’s mooning around reading poetry. There was no one to serve in the pub.’

‘Hence the buxom Bridget. Sullivan’s has never been so popular.’

‘But a hologram, Harry?’

‘Proves my point. It’s as though there’s some kind of Starfleet standing order. You know: No sex, please. We’re Starfleet.’

Tom smiled ruefully. ‘Well, in the Captain’s case, there is.’

‘That’s all very well when you can get shore leave every few months, but surely in these circumstances we could waive the rules. Does the Captain think we’d all mutiny ‘cos it turns out she’s human? And it’s not as though we’d have any less respect for Chakotay.’ Harry paused in exasperation and looked at Seven. ‘At least the Captain talks to Chakotay.’

Tom smiled sadly at his friend’s predicament. He realized Harry was right, but in his own contentment, if one could be merely content in a relationship with the volatile B’Elanna, he hadn’t given much thought to Harry’s feelings.

‘Well,’ Harry said at last, still looking at Seven. ‘Maybe that’s what I should do. A few tweaks to the program. Make her a bit warmer, more likely to like me.’

‘But a hologram doesn’t keep you warm at night, Harry.’

Harry sighed again. ‘But it’s not only sex, Tom. That’s not all you and B’Elanna have, is it? It’s the companionship, the friendship. It’s the really being there for another person.’

Again they fell silent, pondering the imponderable. Harry contemplated Seven’s statuesque proportions. She was beautiful, there was no doubt about that, but did she stir him as a woman like that should? Wasn’t it rather that he admired her, just as he would a statue, a work of art?

‘You don’t think…you know, back in the nineteenth and twentieth centuries, there was this … rumour going ‘round. They used to say that…in the army and the prisons … they were all segregated in those days … that they used to put bromide in the men’s tea … to keep them…calm.’

‘I don’t know really, but it was something that was supposed to suppress their sexual urges. You don’t think Neelix has been … for all the best of intentions … to maintain harmony maybe … been putting something in our food?’

Tom let out a laugh of sheer surprise. ‘Neelix?! No … Harry, this is crazy.’

‘Well, how else would you explain it?’

‘If he has, it hasn’t had any effect on me and B’Elanna.’

‘It would take a lot more than a normal dose to suppress you and B’Elanna’s mating instincts.’

The two friends laughed together.

‘Computer, end program,’ Tom ordered, and the astrometrics lab was replaced by the holodeck’s unadorned metallic grid. Tom gave Harry an encouraging squeeze around the shoulders and led him towards the door. ‘Come on, Harry. Let’s go and get dressed for Neelix’s luau. You should see the Hawaiian shirt I replicated. It’s the loudest you’ve ever seen. And we’ll replicate one for you that even Seven can’t ignore.’ But as they passed through the door Tom stopped and turned back to fiddle with the controls.

‘Just adding a little something to Neelix’s program for the luau.’

Suspended in mid-air in the holodeck was a sign written out in garish neon colors: