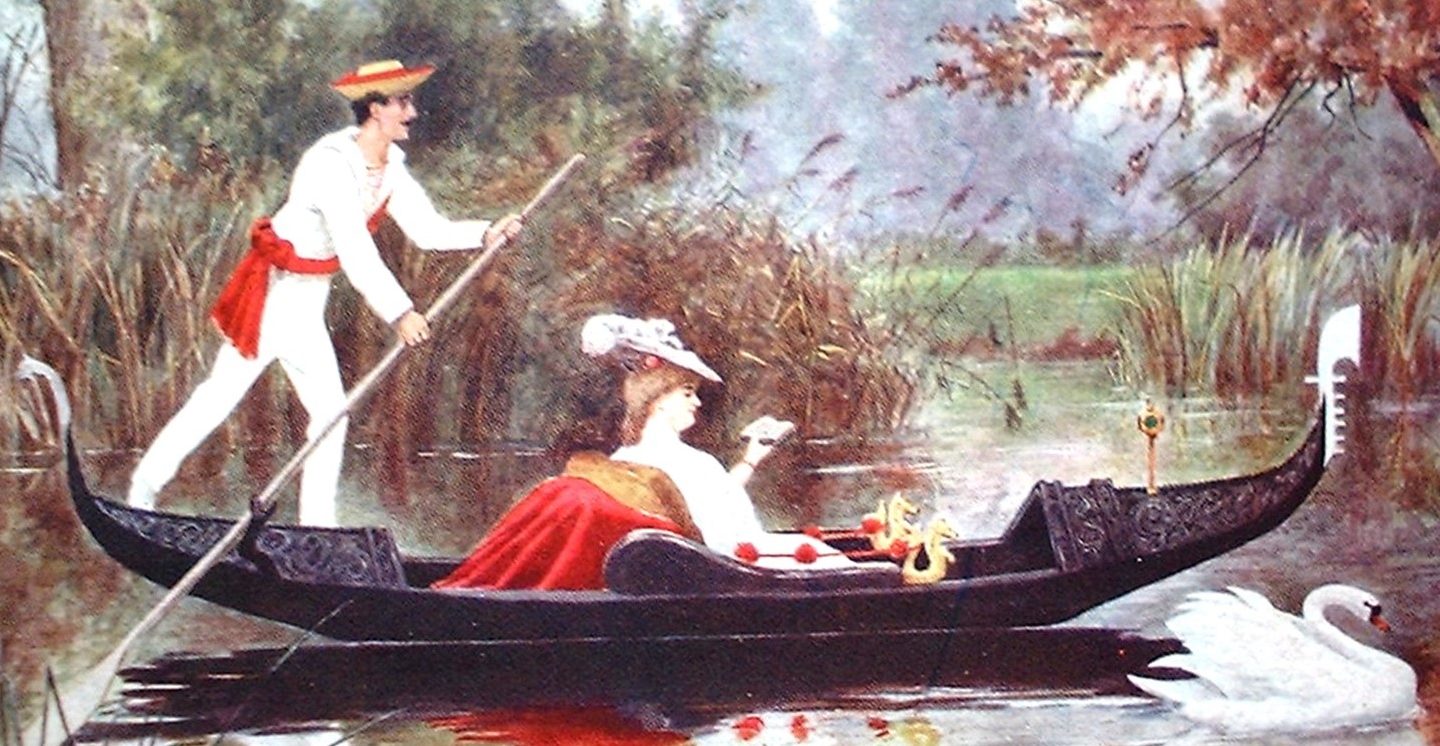 The most popular and most highly paid author of the late Victorian age was someone you may never have heard of.

The most popular writer of late Victorian age was not Arthur Conan Doyle, HG Wells, Rudyard Kipling or H. Rider-Haggard, but a woman whose name few of us would recognise today, Marie Corelli. Corelli published 30 novels, most of which were best-sellers and on her death in 1924 she was Britain’s best-selling and most highly paid author.

Although Corelli was most often derided by the critics for her florid style, melodramatic plots, intellectual pretentions and frequent errors, the public adored her. Among her friends and fans were many of the literary and political elite, including Winston Churchill and the royal family, several of whom, including Queen Victoria herself, collected her books.

While the literature of the 1890s was self-consciously artistic, the story indirect and oblique, lacking a defined narrative voice and morally relativistic, Marie Corelli’s novels drew on an older tradition of sensation, gothic and horror fiction which gave her readers not only a thrill, but a sense of continuity and security. And while her stories were sensational, her values were safely Victorian.

Marie Corelli’s novels unfolded in long, convoluted plots which combined mysticism with elements of weird science and the gothic, elements such as premature burial, angels, time travel, fantastic worlds, dream-magic, mesmerism, astral projection, interplanetary travel, ancient magic, lost races, hidden cities of immortals, reincarnation and ancient Egypt. They did not attempt to intellectualise, but to move, excite, shock and inspire. Her narrative voice spoke directly to the audience, lecturing and advising, comforting and confiding in them. She forthrightly expressed her conservative views, while at the same time espousing eccentric, esoteric spiritual beliefs which she nonetheless tried to reconcile with orthodox Protestant Christianity.

It was only in her fifties that she developed a passion for a man, artist Arthur Severn, whose father had been a close friend of Keats. He lived in John Ruskin’s old home in the Lake District and was married to Ruskin’s cousin. One suspects it was these connections rather than the man himself she fell in love with. However, her passion was never returned and he often derided her success.

Marie Corelli tried to obfuscate her humble and, in her eyes, shameful origins, for she was born illegitimate in London in 1855, the daughter of Charles Mackay, a minor literary figure who was married with four children, and his servant, Mary Elizabeth Mills. They married after Mackay’s wife died when little Isabella Mary was six years old. After a stint in a French convent (which must have been an unpleasant experience as she was later to become virulently anti-Catholic) she started sending out pieces for publication at the age of nineteen. It was during a short musical career in her twenties that she adopted the name Marie Corelli.

Corelli received the first payment for her writing at the age of thirty in 1885 and immediately began her first novel, The Romance of Two Worlds which was published by George Bentley in the following year. Over the ensuing years she produced a series of novels which, though not literary successes according to the ‘clever men of the press’ were popular sensations. So popular and influential were they that one, Wormwood, which rather exaggerated the evils of absinthe, led to harsh anti-alcohol laws in Switzerland. Corelli had great respect for her public whose tastes, she believed, were fundamentally decent, but was hostile towards the press and the publishing industry. Though she tended to be abrasive and insensitive herself, she was easily offended and never forgot or forgave a slight.

At the height of Corelli’s career, a new publishing era began which was not only to bring her more fame, but much greater fortune. Hitherto, the publishing industry had catered very much to the needs of the circulating libraries. New novels were published in three volume sets that were so expensive only the libraries could afford to buy them. Readers had to borrow them or wait for the cheap one volume editions to come out some six months later. The libraries negotiated upfront and discounted payments for new releases based on their potential profitability. This allowed the publishers to pay authors an upfront, one-off fee.

However in 1895, the circulating libraries announced that they would no longer pay high prices for new releases and demanded that the cheap editions should not come out until a year later. The publishers responded by releasing the cheap editions immediately, thus encouraging a book-buying rather than a book-borrowing culture. From then on authors’ payments would depend on their sales volume. With her immense popularity, Corelli would benefit the most from this new system. 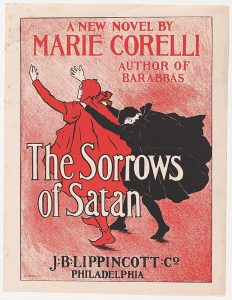 Corelli used her first novel under this new regime to retaliate against her critics. In The Sorrows of Satan, she depicts Satan as a sophisticated aristocratic adventurer, roaming the earth looking for someone who would not succumb to temptation. The mercenary, decadent press and corrupt publishing industry are contrasted with the pure and angelic author Mavis Claire (a very thinly disguised Marie Corelli) who charitably forgives the critics who fail to appreciate her genius. Corelli was now in a position to dictate terms and she refused to allow the distribution of free review copies. If the critics wanted to pan her new book they would have to pay for the privilege. Ironically The Sorrows of Satan got more press coverage than ever and the critics had to grudgingly admit that the book had some literary merit.

In 1899, after a bout of ill-health, Corelli moved to Stratford-upon-Avon with Vyver where they bought and renovated Mason Croft, a rundown Tudor mansion. Corelli threw herself into local affairs and antagonised the town’s male hierarchy by resolutely, and sometimes unilaterally, championing the cause of preserving Stratford’s heritage and character. It may well have been in retaliation that Corelli was charged with food hoarding during World War I when she circumvented rationing to acquire a large amount of sugar to preserve her orchard’s bumper crop. The resulting adverse publicity only hastened the inevitable decline in her popularity after the trauma of World War I and the resultant changes in public tastes and attitudes.

In 1924, Corelli suffered a fatal heart attack, but her nurse, not seeing the imminent danger, refused to wake Vyver and Corelli died alone. In her will Corelli left her entire estate to Vyver for her lifetime. Thereafter Mason Croft was to become a trust and a meeting place and accommodation for authors visiting from abroad. Vyver continued to live in Mason Croft and attempted to preserve it as Corelli’s will stipulated, but diminishing royalties left her to struggle on in increasing poverty until her death in 1942.

As there was no money left to maintain the house, Corelli’s will was declared null and void, their household goods were sold at auction and the house taken over by the Air Ministry. After World War II it was acquired by the government and occupied by the British Council. In 1951 it was purchased by the University of Birmingham and now houses the Shakespeare Institute. Corelli’s own personal papers are held by the Shakespeare Birthplace Trust.

Though mostly forgotten in the literary world, Corelli is fondly remembered for her tireless efforts to preserve Tudor Stratford-upon-Avon, without which the town would not be the thriving tourist destination it is today.

In 1904 Marie Corelli attended the Italian Fair in London and purchased an authentic Venetian Gondola complete with an Italian gondolier. She and Bertha Vyver became a well-known sight as they punted in it up and down the River Avon. However, the gondolier took to drink and was sent back to Italy. Thereafter one of Corelli’s gardeners, Earnest Chandler, took over as gondolier. When Chandler went to war in 1915, the gondola was put into storage, but after his death in 1917 Corelli never used it again.

The gondola was sold in the auction after Vyver’s death, changing hands several times and used in various places for tourism, film and promotional work. In 2010 it was finally purchased by Avon Boating, fully restored and is now available again for boating on the River Avon at Stratford.

Originally published at englishhistoryauthors.blogspot.com.au on March 22, 2014