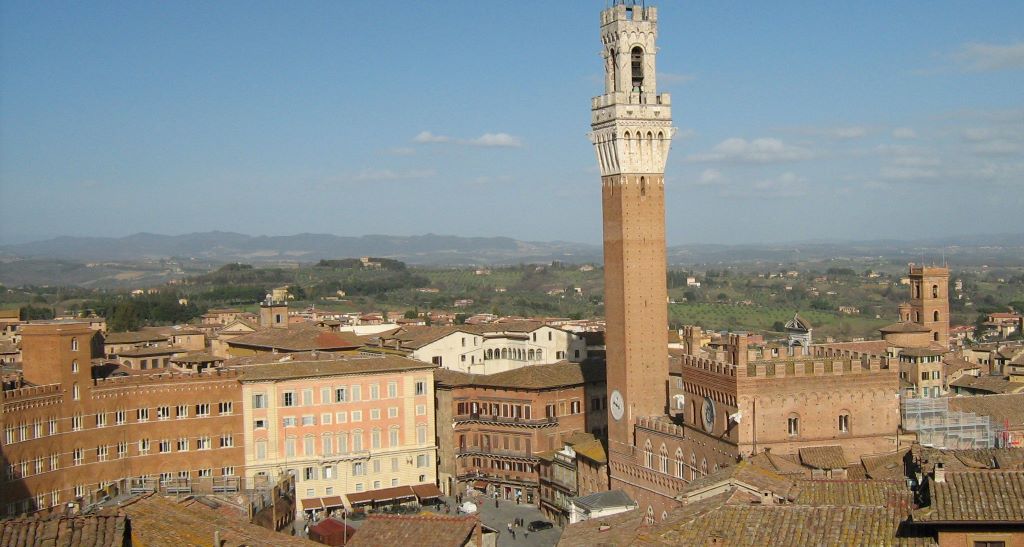 Ancient walled cities dot the landscape of Northern Italy. They perch on hilltops like Bergamo and San Gimignano. They nestle in picturesque river valleys like Florence and Verona. They lie by river banks in the flat valley of the River Po like Mantua and Vicenza. Though some have been subsumed into a bustling port city like Genoa, or a commercial dynamo like Milan, many retain their ancient and unique charms like Pisa and Venice. Though these cities may have flowered during the Renaissance their days of true glory came in the thirteenth and fourteenth centuries when they were rich and independent mercantile city states.

To visit these cities is to step back into another time. Inside their encircling walls, the houses, with their simple lines, made of local materials, seem to have grown out of the earth itself, sometimes ochre tuffa and terra cotta like Siena or white pietra bianca like Perugia. At the heart of the city is a grand piazza, like the Piazza del Campo in Siena or the Piazza delle Erbe in Verona. On market days they fill with farmers from the hinterland selling their produce. On city feast days they are draped in the colours of the local clans and might host a horse race like Siena’s Palio. Fronting the Piazza is a grand municipal building, sometimes called La Signoria as in Florence or il Palazzo della Ragione as in Padua, from which the city was once governed.

Indicating the division between Church and state, though built by the people in honour of their patron saint, the city’s cathedral or Duomo sits on a fine piazza of its own. The Duomo was not only a place of worship. It represented the city’s history and its wealth and was large enough to house the city’s total population of up to 10,000 on municipal feast days. Attached to the Duomo might be a Baptistry or a campanile. Though the largest, the Duomo was not the only church in the city, as smaller parish churches and devotee chapels might be found on every street.

Away from the grand piazze, the streets are narrow and the houses tall and sometimes walled, their arched doorways all one can see from the street. Occasionally you will come across a tall featureless tower or the remnants of one. These were built in the early days of the city by rival feudal clans (see Northern Italy in the Middle Ages) for their self-defence, and from which they would sally forth to attack their enemies, much to the great terror of the citizens.

If we make our way back to the piazza, we can visit the municipal palace. Inside, the walls might be covered in frescos dating from as early as the twelfth century depicting the ideals of good governance for the edification of the council of citizens, or the Commune, that ran the city’s affairs. The make-up and methods of selection of the Communes differed from city to city and from time to time as cities experimented with different forms, but generally the Communes were formed from the city’s most affluent men.

Drawn from the middle classes, these men had in large part been made rich through international trade, (see The Merchant of Prato) but most of them would be landowners as well. Among them might also be bankers, lawyers and notaries. All of them would be literate and educated in law and rhetoric (and perhaps double entry accounting, which had been invented in Italy.) Some of these men might be separated by only one or two generations from their peasant ancestors as the city state was a place of opportunity where social barriers were low.

To a large extent, the old feudal nobility was excluded from the Communes as, in fact, the Communes had been formed to protect the citizens from their unruly violence. However, they were not excluded from city life altogether, and behind the scenes would have been able to exert some power and influence. They generally had homes in the city where they spent most of their time, as well as country houses where they retreated in summer. Just as the merchants might also be landowners, the nobility would also dabble in trade, despite their patent disdain for the gente nuova who made their fortunes from it. In their own way, the nobility were crucial to the defence of their cities. They were required to maintain a horse and armour for cavalry duties and were often called on to act as ambassadors for their city to the Emperor’s court.

Sometimes, as rivalries between powerful men, or unexpected crises made the Commune unworkable, an able administrator, a man with authority and legal training, might be called on to take over the running of the city. The podestà was contracted to take the reins for a fixed period. Many men made this their profession, moving from city to city. However in some cities his contract might be renewed year after year, either because the citizens had come to rely on him, or because he had become too powerful to dismiss. In such a case his position might not only became permanent but hereditary. In some cities, the Commune might be undermined and taken over from within by a rich clan, such as the Medici in Florence.

An ambitious or disaffected nobleman with military skills might hire himself out as a mercenary commander or condottiere (see The Scourge of Italy: the Condottieri and their mercenary armies). Many cities hired condottieri to fight their constant intercity wars because they might not have the population or money to maintain a permanent army of their own. However they would one day pay with their freedom. Following the devastation and chaos created by the Black Death, (see La Pestilenza: the Black Death in Italy) many of these condottieri were able to take control of the very cities that had once hired them.

So, in one way or another, by the fifteenth century, most of these once independent and democratic city states had been taken over by one petty tyrant or another. Over time their de facto power was recognised by the Emperor who, generally for a price, awarded them an aristocratic title. Yet despite their venal beginnings, it was this new class of aristocrats who became the patrons of the Renaissance.

Society and Politics in Medieval Italy by J.K. Hyde (1973)