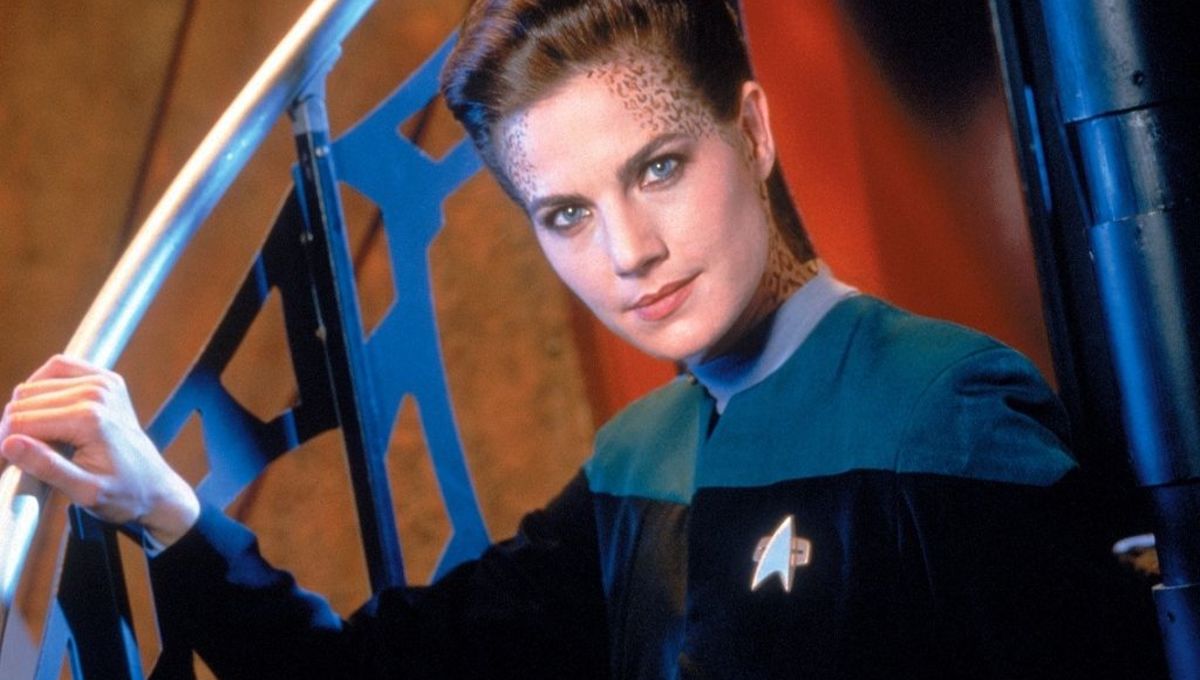 The Trills are a fascinating species, but they weren’t born fully formed.

One of the most interesting characters on Star Trek: Deep Space Nine is the Trill, Jadzia Dax, played by the lovely Terry Farrell. Jadzia Dax is not one person but two. Jadzia is a beautiful young woman whose humanoid anatomy is decorated with two rows of spots that start on her forehead and go ‘all the way down’ her sides. However, while highly trained and educated in her own right, much of Jadzia Dax’s knowledge, wisdom, memories and character come from the worm-like symbiont, Dax, which Jadzia carries in her abdomen. Dax is over three hundred years old and has had several hosts of both genders. This dichotomy is underlined by Benjamin Sisko who was old friends with Dax’s previous host, Curzon, and always calls this beautiful young woman ‘Old Man’.

During the course of the series we learn that in order to qualify to carry a symbiont, a Trill has to go through years of intensive training and testing. It is considered a rare and supreme privilege to be chosen. Only later is it revealed that many more Trills could carry a symbiont than is generally acknowledged. This fact comes to Dax’s rescue when Jadzia is killed. Dax is removed from her body, but on the voyage back to the Trill home world it almost dies and must be placed in the body of the only Trill on board, young Ezri, who has had no preparation for the role and turns out to be a most independently minded host.

This is not the first appearance of the Trill whom we first meet in the Star Trek: The Next Generation episode The Host. The Enterprise is carrying a passenger, Ambassador Odan, a skilled negotiator who is on his way to a conference to bring peace between the inhabitants of two moons on the verge of all-out war. Odan is handsome and charming and wins the heart of Dr Beverley Crusher. However, he is hiding a secret. He is carrying a symbiont in his abdomen. When it is time to descend to the surface, Odan refuses to use the transporter, which would kill the symbiont, and asks to be carried down by shuttlecraft. The shuttlecraft is attacked by one of the warring parties and Odan is fatally injured. When Dr Crusher finds the symbiont and proposes removing it surgically, Odan must reveal that he is the symbiont and that the handsome body is only a host. When the host dies, and another Trill host is still several days away, Riker volunteers to host the symbiont in order to undertake the delicate negotiations. Riker’s body rejects the symbiont and is in constant pain throughout the negotiations, barely surviving to bring them to a successful conclusion. Finally the new Trill host arrives, a young woman who becomes the new Odan.

While supposedly the same species, there are marked differences between Dax and Odan. Odan’s humanoid host has no spots but a ridged forehead and nose. While Odan’s host’s personality is totally subsumed by the symbiont, Dax’s hosts retain much of their own personalities. Although Odan might be killed by using the transporter, Dax happily goes through the transporter regularly. Odan is able to survive, albeit for a short while, in a human body. Dax cannot survive in all Trill bodies, much less an alien species. And while Dax is forbidden to continue relationships formed by previous hosts, the new, female Odan proposes continuing the relationship begun with Dr Crusher in her previous incarnation.

These differences have caused consternation among Trekkies, who try to explain them within the Star Trek canon, as though the Star Trek universe is real and necessarily consistent and scientifically explicable. But again we must remember that it is not a real universe, but an evolving fictional construct, subject to the shifting ideas of its changing cast of writers, producers and production crew, as well as the constraints of a limited budget and shooting schedule.

Take Jadzia’s spots, for instance. One fan explained the different appearance of Odan’s and Dax’s hosts, by surmising that they might come from different parts of the planet Trill. The real reason is quite prosaic. Terry Farrell just did not look good with the ridged forehead. Michael Westmore, the makeup artist, had little time to design a new look so decided to reuse the dot pattern he had previously invented for another species. The spots were to become a large part of Jadzia’s sexual allure.

That Odan cannot use the transporter is important for the plot of The Host, firstly because it explains why the symbiont is not detected earlier. More importantly, it provides an occasion for the host to be fatally injured and die as required for the story. (This also explains why the Enterprise uncharacteristically fails to fight off the attacking ship.) An alternative would have been for Odan to beam to the surface and be attacked on the ground. Such a sequence would have been expensive to set up and take too long to shoot. It would also have taken precious minutes out of the episode’s running time which the writer preferred to devote to Dr Crusher’s reaction to the death. On the other hand, it would be impossibly inconvenient for Dax to be unable to use the transporter for the seven long seasons of Deep Space Nine.

None of these story lines would be available if Dax, like Odan, completely subsumed his host’s personality so that the host merely becomes the symbiont’s physical frame. However, it works in The Host because the focus is on Odan’s interaction with other people, particularly with his lover, Dr Crusher, rather than any internal conflicts. It also allows for additional drama when Riker takes in the symbiont. He becomes Odan in every way and his own personality disappears. Of course, the writer could have had the new Trill host arrive much sooner and take over the negotiations, but in delaying her arrival he created a perilous situation in which Riker/Odan is in danger of being unable to prevent the war and of dying himself.

However, and more importantly, it also allows for an exploration of Dr Crusher’s feelings for Odan. Beverley is passionately in love with what she believes is a handsome humanoid. When he is dying she discovers that she is actually in love with a worm-like alien. This aspect is conveniently side-stepped. Beverley is scrupulous in her care of the symbiont when it is outside its host, but it is only when it is in its host that she expresses any love for it. The question is not, therefore, can she love a member of a totally alien species, but can she still love the person Odan in another body.

The real centre of this episode is not the revelation of a new alien species, but the sensitive exploration of human love. Is human love more than purely physical? Does Beverley love the person or the man? Is her love spiritual or entirely physical? Is it really love or merely infatuation with a handsome stranger? Of course these questions could still have been explored if Odan went into another Trill male, but the issue is complicated by Odan being in Riker’s body, raising the question of whether one can take as a lover someone one has seen as just a friend and colleague for several years. Eventually Dr Crusher is able to accept Odan in Riker’s body, but she cannot accept Odan in a female body, and while she still loves Odan, cannot continue their relationship.

The possibilities raised by the switching of genders are further explored in the Deep Space Nine episode Rejoined. A Trill scientific team comes to the space station. The team leader is a joined female Trill, Dr Lenara Kahn, whose previous host, Nilani Kahn, was once the wife of one of Jadzia’s male predecessors, Tirias Dax. Tirias died in testing a shuttle craft he knew was still unsafe despite Nilani’s warnings, so the two have much unfinished business. Kahn and Dax are immediately drawn to each other, finding, in fact, that they have more in common as Jadzia and Lenara than they ever had as Nilani and Tirias, but their renewed and passionate relationship is forbidden by Trill society.

Such a ‘re-association’ is considered unnatural and against the symbiont’s need to gather new knowledge and experience from each new host. The couple risk being exiled from the Trill home world which means there would be no new hosts for their symbionts, condemning them to death with the death of their hosts. Such an outcome would go against everything Trills believe in as their one purpose in life is to protect and nurture the symbionts. While Dax is willing to pursue the relationship whatever the consequences, Kahn cannot and leaves Deep Space Nine, breaking Dax’s heart.

The fact that this relationship is between two women does not bother their friends. What concerns them is the price they would have to pay for violating the ‘re-association’ taboo and the fatal consequences for their symbionts. At the same time, it is evident that the Trill taboo is a thinly disguised allegorical representation of our world’s taboo on homosexual relations, the death of the symbiont equating, perhaps, with the impossibility of procreation for a homosexual union.

On close examination, however, the Trill taboo is as pointless and unenforceable as our own. There seems to be no good reason for forbidding such relationships and the reasons given seem to be simply justifications for an irrational prejudice. Despite the disapproval of society, nothing can keep these two people from falling in love, and it is only society’s unnecessary interference that keeps them apart or causes any harmful consequences.

Nor does the taboo extend beyond this episode. Dax’s friendship with Sisko extends beyond the lifetime of one host, and not only does Ezri rejoin Deep Space Nine’s crew, she even considers the possibility of continuing Jadzia’s relationship with Worf. If she and Worf do not get together, it is not because of the taboo, which is never invoked, but because Ezri is a very different person to Jadzia.

Of course, anyone sympathetic to the LGBTQI cause would wish that Dr Crusher had been brave enough to pursue a relationship with a female Odan, or that Kahn was strong enough to challenge Trill prejudices, but such outcomes would be impossible, and not simply for reasons of gender politics.

It would not fit in well with the series for a major character to form a permanent relationship with a guest character. Would the major character leave the series for their new love — as Odan proposed for Dr Crusher — with all the disruption that would cause for the production and its audience? Or would the series’ budget stretch to keeping the lover on as a new on-going character — as Dax proposed for Kahn? How would such a relationship change the character? Would it restrict their availability for further adventures in the future? Would it disrupt the series’ long term story arc?

But perhaps, such questions are fundamentally irrelevant. Perhaps it is simply that sad endings make for better drama than happy endings.