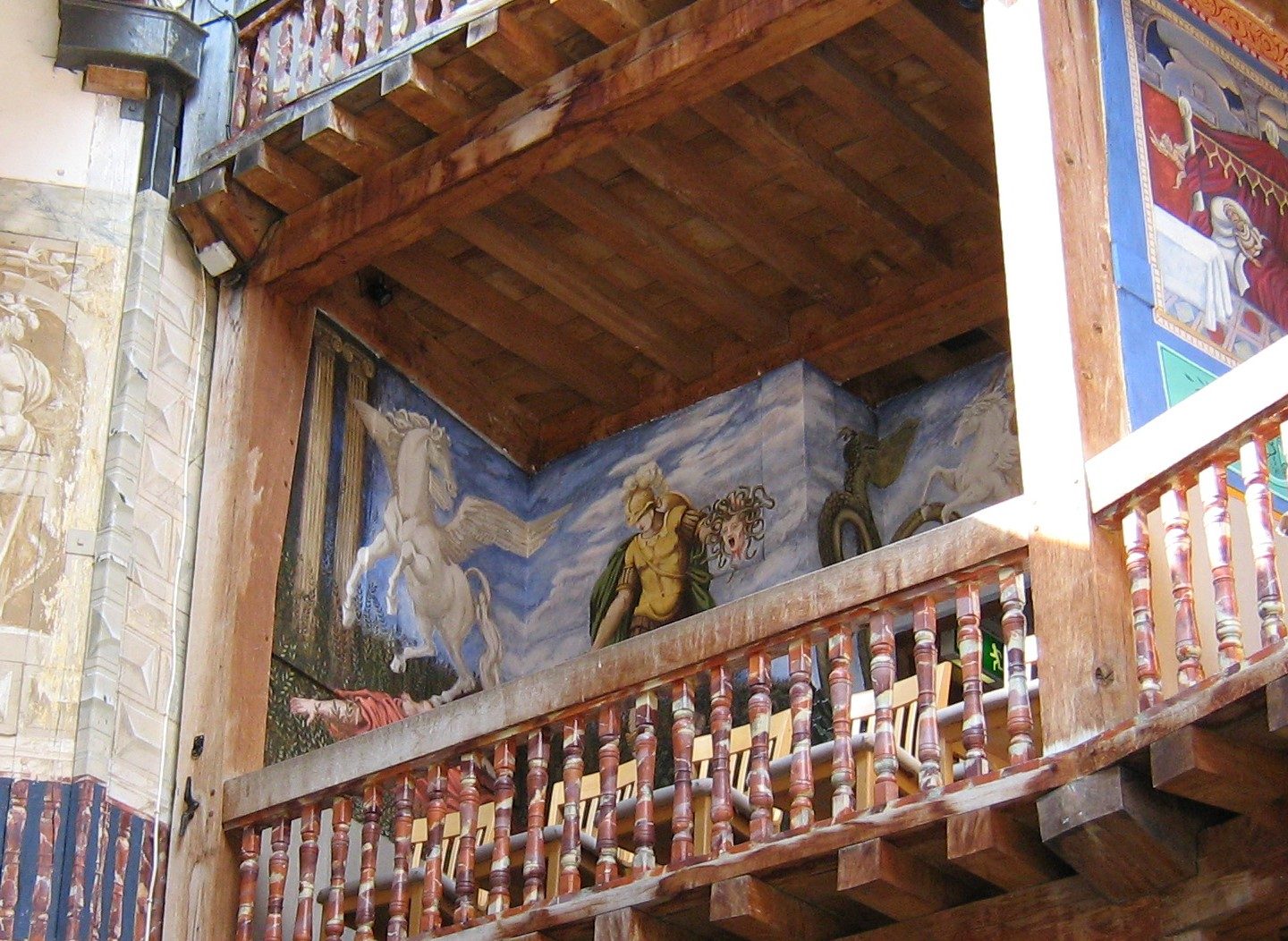 James Burbage’s playhouse, The Theatre, was the setting for a real life drama as exciting and tragic as any Shakespeare himself would write.

As we saw in Shakespeare Goes to London it is highly likely that William Shakespeare began his career in London with the Burbages at The Theatre. If he did so, he would have walked straight into an ongoing drama no less turbulent, tragic and enthralling than any he was to write himself.

Despite his important role as a pioneer of the Elizabethan theatre, James Burbage’s character is not generally admired by historians. According to the The Oxford Companion to the Theatre James Burbage was ‘a man of violent temper, stubborn and unscrupulous, beset all his life by financial and other difficulties’. Yet in the same paragraph we read: ‘he never wavered in his allegiance to the theatre, and though apparently not a good actor himself he was excellent at selecting and training his fellow players, among them his son Richard.’ How could a man be feckless yet tenacious, unscrupulous yet selfless? How could he gain such an incongruous reputation?

My own first hint of how he did so came quite fortuitously from a description, in the 1954 Arden Shakespeare edition of King John, of a violent fracas which took place at The Theatre. It was a scene that might well have come straight out of one of Shakespeare’s plays.

(The play’s editor, EAJ Honigmann, assuming that The Troublesome Reign of King John, which was first published in 1591, was a hastily produced Bad Quarto, dated Shakespeare’s play to 1590. He therefore posited that the play was being written while this disturbance was going on, and that the action of the play owes more to what was happening at The Theatre than to King John’s actual biography. Honigmann’s dating has since been proven wrong – the current consensus is that Shakespeare’s play was written in 1596 – but I am grateful to him for bringing this fascinating story to my attention.)

On 16 November 1590, Burbage’s sister-in-law, Margaret Brayne, came to The Theatre with several supporters, including Robert Myles, with a court order to sequester her share of the house’s takings, a right which she believed she had inherited from her late husband, James Burbage’s partner.

A physical affray ensued in which, according to witnesses,

James Burbage’s wife charged them to go out of her ground or else she would make her son break their knaves’ heads and so hotly railed at them. And then the said James Burbage, her husband, looking out at a window upon them, called the complainant murdering whore and… the others villains, rascals and knaves… Richard Burbage and his mother fell upon the said Robert Myles and beat him with a broom staff calling him murdering knave with other vile and unhonest words at which time the said James Burbage told the said Robert Myles that he had but a paper which he might wipe his tail with and rather than he would lose his possession he would commit twenty contempts.

A footnote directed me to a book first published in 1913, The First London Theatre by CW Wallace. This rare book makes for riveting reading. Later researchers have been able to add a few details to the story, but it is to Charles Wallace that we owe the greatest debt for its discovery.

One of the ironies of history is that all too often we only get a glimpse into the daily lives of ordinary people through legal documents. If it were not for the fact that James Burbage got into trouble we would never have known so much about him. However, we must also be aware that the details of this story come from depositions written many years after the events, sometimes by witnesses that were not necessarily a party to the actions they describe, some of whom with a great deal of personal interest in the outcome. The depositions, therefore, are far from neutral and, as the documents they refer to have long since disappeared, very few of their claims can be corroborated.

However, even with these reservations, this is a fascinating story, and though it is long and complex, I shall try to render it as succinctly and clearly as possible.

As we saw in The Burbages: First Family of Theatre, James Burbage built The Theatre in 1576, but throughout its twenty year history, he would have to contend with constant hostility and difficulties from three sides.

The City of London authorities were implacably opposed to the culture of theatre-going, and, although Shoreditch lay outside their jurisdiction, they still had the power to constantly harass Burbage. Meanwhile, his landlord was never comfortable with his property being used for a playhouse, putting every obstacle in his way and finally refusing to renew the lease. But Burbage’s greatest difficulties were to stem from his disastrous choice of a business partner, his wife’s brother John Brayne.

James Burbage took up the lease on Holywell on his own but soon after he entered into a verbal contract with his brother-in-law John Brayne to build and conduct The Theatre as partners sharing equally in the expenses and profits. John Brayne was reputed to be a rich and substantial man worth around £600. He claimed that James Burbage had persuaded him to invest and he had had to sell his house and business to cover the debts he incurred in the construction. In actual fact, Brayne was already heavily in debt when he entered the partnership, and had signed over his assets to another brother-in-law in order to protect them from his creditors.

In 1577 John Brayne required Burbage to sign over half the lease to him, but although the bonds were drawn up twice, Burbage did not sign the lease over because it had been mortgaged. In the following year the partners went to arbitration where Brayne accused Burbage of stealing from the takings for his own benefit and asserted that he had spent three times as much on construction as Burbage had. Furious, Burbage assaulted his brother-in-law.

In order to resolve the dispute Brayne and Burbage entered into a written agreement re-affirming their equal partnership. The agreement allotted most of the profits to first paying off their third-party debts and then reimbursing Brayne for his expenditure over and above Burbage’s.

However, it seems that few of the terms of the agreement were kept. Burbage was arrested for a debt raised in both their names and was forced to pay it all in order to be freed. Soon they got deeper into debt, mortgaging the lease to a money lender, John Hyde, for £125. When, a year later, the debt had not been paid, the lease was forfeited to Hyde. In order to get his money back Hyde allowed Burbage to continue running The Theatre as long as he was paid £5 a week until the debt was settled, but no such payments were made and Burbage was arrested again. Burbage paid the £20 bond required for his freedom, but told Hyde that Brayne was taking all of the profits from The Theatre from which he was supposed to pay the debt.

In the meantime, in 1580, Brayne had taken up the lease of the George Inn in Whitechapel and entered into a partnership with Robert Myles. In the ensuing years Brayne and Myles were to carry out several shady manoeuvres in order to get money, such as falsifying the lease in order to gain credit, and persuading friends and relatives, including James Burbage, to stand guarantor for loans they never repaid. In 1586, when Brayne’s debts had mounted to between £800 and £900, he put all his property into the hands of others and he and Myles were nowhere to be found when the bailiffs came calling.

John Brayne returned home, but died soon after as a result of a flogging he claimed he had received from Robert Myles. The will he had drawn up in 1578 was proven but it made no mention of The Theatre whatsoever, nor did it fulfil the undertaking he had made to leave his share of The Theatre and the George Inn to Burbage’s children.

Meanwhile, John’s wife, Margaret Brayne, had Myles called up before the coroner’s inquest, accusing him of murdering her husband. Nothing came of the accusation, except that Myles tried to have Margaret evicted from the George Inn where she was living, claiming she owed him, on behalf of her dead husband, £500. Eventually the two were reconciled and were soon acting together against the Burbages. Shortly before her death in 1593 Margaret named Myles as chief legatee and executor of her will, calling him her only friend and support and commending to him the care of her only daughter Katherine who had been born a few months after her husband’s death.

By 1589, Burbage had stopped paying Margaret John Brayne’s share of the profits from the The Theatre. In response, with Myles’ backing, Margaret Brayne sued James Burbage. In November 1590 she obtained a court order authorising her to sequester her share of the takings, and although the Burbages had had the order stayed, on November 16, Margaret Brayne, Robert Myles, his son Ralph and others took a copy of the court order to The Theatre to try to force James Burbage to perform its terms. It was then that the physical affray described earlier took place.

Margaret and Myles did not succeed on that occasion, but the matter did not end there. Myles continued to bring his suit against the Burbages even after Margaret’s death, and it was not withdrawn until Francis Bacon finally dismissed the case in 1602 when it was brought before him in the Star Chamber.

These are the bare bones of the story, and we can see why anyone reading or witnessing it might think badly of James Burbage for showing such belligerence towards a defenceless widow. But was there more to this story than the facts garnered by historians? Was James Burbage really as ‘violent [of] temper, stubborn and unscrupulous’ as he has been made out? Or did he have a good reason for acting as he did?

Shouldn’t we have a bit more trust in William Shakespeare’s choice of a lifelong mentor?

In part two of this story, we’ll try to get a better understanding of what was really going on.

The Business of Playing by William Ingram, Cornell University Press (1992)