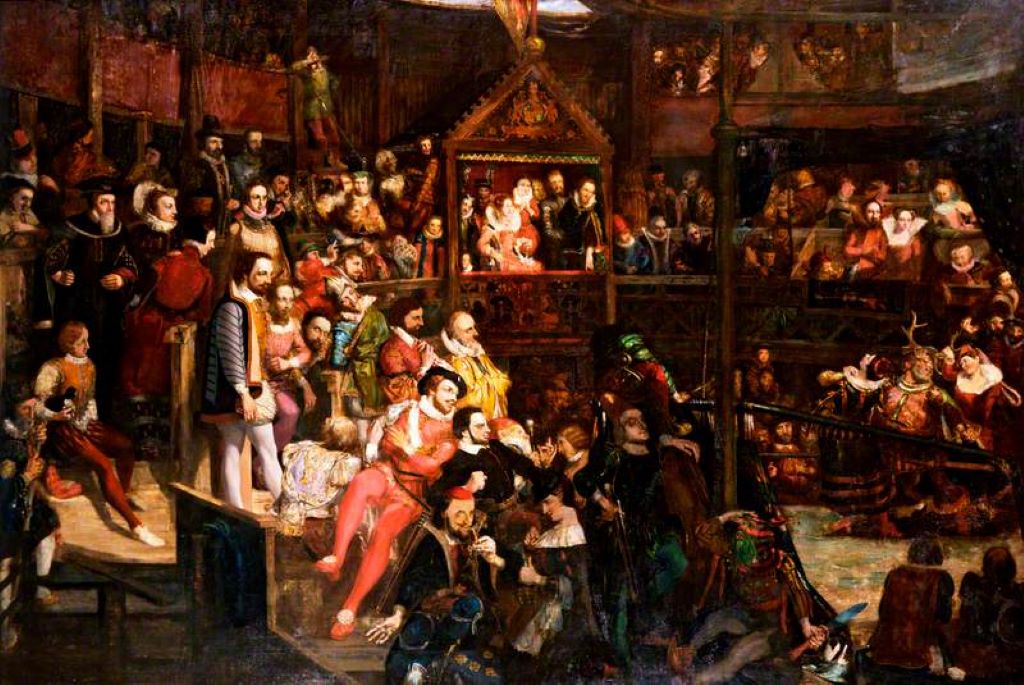 Why did James Burbage’s partnership with his brother-in-law, John Brayne, cause him such turmoil and heartache?

As we saw in the first part of this story, in building London’s first purpose-built playhouse, The Theatre, James Burbage entered into a disastrous partnership with his brother-in-law, John Brayne, which would entangle Burbage in legal and financial disputes and even lead to his being imprisoned for debt. However, the Burbage saga, while fascinating, raises more questions than it answers.

Why did James Burbage enter into this partnership in the first place and then continue in it when it was obviously causing such trouble? Why did John Brayne behave as he did? And what was the real nature of the relationship between Margaret Brayne and Robert Myles? What does this story really say about the Burbages who were to play such a large part in Shakespeare’s life and work?

An historian might be willing to leave these questions unanswered, but as a novelist I need to understand the motivation behind this fascinating story.

It is not unlikely that Burbage solicited his purportedly rich brother-in-law’s investment in his project. He would have trusted him as his wife’s beloved brother and it is highly unlikely that he knew of Brayne’s real financial situation. Alternatively, he may have included him in the enterprise to make up for the failure of Brayne’s earlier venture into playhouse building. (see The Burbages: First Family of Theatre)

However the partnership began, it was only after a written agreement had been signed that Burbage found himself being held responsible for Brayne’s debts. By then it might have been impossible for Burbage to extricate himself. As for Brayne, he seemed to be acquiring money from both The Theatre and the George Inn, yet he was not buying assets or paying his debts which kept accumulating alarmingly. Where was the money going?

It was in pondering this question that I came up with a theory that might provide an answer to these questions. Could it be that John Brayne had a secret gambling problem?

Human nature has not changed very much. If we can lose millions on gambling today, Elizabethans could do the same, as gambling was as popular in Elizabethan England as it is now. They too gambled on card games and sports, but the games on which huge sums were wagered were the popular blood sports such as bull-baiting and cock-fighting. Such sports, which provided the thrill of spilt blood as well as the adrenaline rush of a big win, must have been even more addictive than our tame modern-day poker machines.

When examined closely, John Brayne displays all the classic behaviours of a problem gambler. Problem gamblers go to great lengths to hide their gambling and losses. They lie about where their money is going to or coming from. They ask family and friends for money, and rely on them to bail them out of their debts. They steal or turn to embezzlement or fraud to get money. They also tend to blame their gambling on others. This behaviour obviously puts a great strain on their relationships.

As we have seen, our evidence for this story comes largely from depositions written as a result of the litigation Margaret Brayne brought against the Burbages many years after her husband’s death. None of the actual documents referred to survive to corroborate any of the claims made in the depositions. Nor were Robert Myles or Margaret Brayne party to many of the transactions to which they testify, so we must assume that some of the claims they made were based on what John Brayne had told them. As much of what they said does not ring true it could be that Brayne lied to them.

Was he lying to Myles when he told him that Burbage had persuaded him to invest in The Theatre? Did he actually need to sell his house and business not to cover the cost of building The Theatre but because of debts he had incurred earlier? When Burbage attacked Brayne, was it because of the accusation of stealing, or was it because Brayne was so blatantly lying about the amount of money he had spent on The Theatre? Was this another attempt by Brayne to hide where his money was going? Did he tell Burbage his money was going into the George Inn and Myles that it was going into The Theatre? Did Myles’ dogged pursuit of Burbage stem from his belief that the money owing to him had gone into The Theatre?

Brayne also seems to have been making use of his partnership in The Theatre to incur debts, leaving Burbage with the consequences. Did Burbage refuse to sign over the lease to Brayne because he was expecting Brayne to pay off the mortgage on it? Did Brayne persuade Burbage to re-mortgage the lease to Hyde to cover his own personal debts, promising him that he would pay it off from his share of the profits? Is that why Burbage refused to pay the debt himself? Was he dipping into the takings in order to pay the bills Brayne was not paying? While Myles seemed to go along with some of Brayne’s frauds, he too claimed that Brayne owed him £500 at his death. Was Brayne taking as much advantage of Myles as he was taking of Burbage?

For the Burbages to put up with Brayne’s behaviour, he must have had a strong hold on them. He was, after all, Ellen Burbage’s only family as he was her one sibling and both their parents had died. Perhaps he had some charm, but he also kept the Burbages onside by promising to make their children his heirs (his own children having all died young and Katherine being still to come).

From what was said during the affray at The Theatre, the Burbages obviously believed that Margaret and Myles were lovers and had colluded in Brayne’s death. Did Brayne also manage to turn them against Margaret, blaming her for his bad behaviour? Or perhaps, in trying to shield and protect her husband, Margaret was perceived by the Burbages as being too hard on him? What are we to make of Brayne’s claim that he died as the result of a flogging he received from Myles? The accusation came to nothing, so did Brayne lie again, even in extremis? Had he received a beating from some nefarious types he owed money to, but still could not bring himself to tell his wife the truth? Why would he blame his death on his best friend? Was he too afraid to name the real culprits and so named someone who was less dangerous?

Were Margaret and Myles lovers? Was Katherine his child? If they were, could one blame Margaret? Her life with Brayne must have been hell. It would have been difficult enough if she was unaware of his gambling. If she did know she would have had the added burden of protecting his secret, and incurring his family’s animosity.

So, what are we to make of all this? How does it reflect on James Burbage’s character? He certainly comes across as hot-headed and stubborn, but was he unscrupulous? While Myles collaborated with Brayne in his various frauds, Burbage did not, which argues for his basic honesty. Burbage was certainly abusive towards Margaret, however, in his defence, he had endured years of exploitation and financial losses at Brayne’s hands, which he blamed on Myles, and now believed that Margaret had been unfaithful to his wife’s beloved brother and colluded in his death with that very man. We can understand that he might become belligerent in order to protect his family’s interests and the result of all his hard work and heartache.

So, perhaps as Shakespeare’s mentor, James Burbage was not quite as bad as his reputation would imply. Shakespeare himself must have respected and sympathised with Burbage for he continued to work with him and his sons throughout all these troubles.

Biographers have closely examined William Shakespeare’s family background in order to find some correlations between the boy from Stratford and his plays. They have found profound childhood influences in his language and imagery. However a young man in his early twenties, newly arrived in a strange city, and taken in by a passionate, creative family, may be just as impressionable as a child, and these influences are just as likely, if not more so, to infuse his work as those of his childhood.

In concentrating on the Shakespeares and the Ardens, biographers have neglected another family which had perhaps an even stronger influence on Will’s life and works, the Burbages.

As we shall see in the third part of this story, while this family drama may have had a profound personal effect on Shakespeare and the Burbages, it was also to have wider repercussions that would shape the Elizabethan and Jacobean theatre for years to come.

The Business of Playing by William Ingram, Cornell University Press (1992)