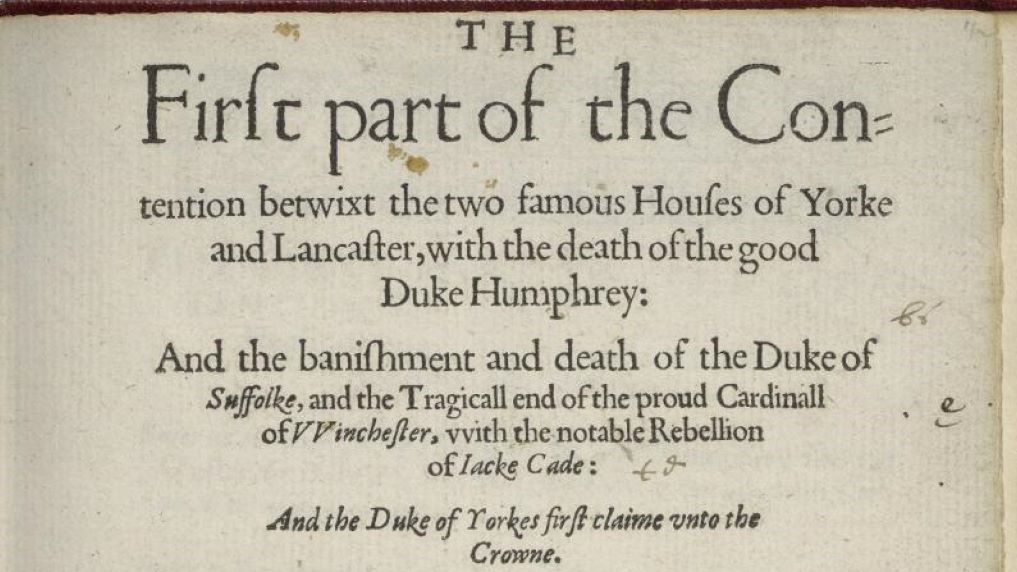 James Burbage’s conflict with his sister-in-law, Margaret Brayne, would not only have personal consequences for his family, but also wider repercussions that would shape the Elizabethan theatre for years to come.

In the mid-1590s five new plays hit the stationers.

Except for Marlowe’s Edward II, the remainder of these plays were published anonymously, but were later to be included in the First Folio (the first two as Henry VI, Parts 2 & 3) and all had been staged by Lord Pembroke’s Men.

There is little documentation on Lord Pembroke’s Men apart from these quartos. They appeared at court twice during the Christmas season of 1592/93. Their movements on tour around the countryside can be traced through 1593 while the London playhouses were closed down. However, their tour was not a financial success. A letter by Henslowe to his son-in-law Edward Alleyn reports that they arrived back in London in September 1593 broke and were forced to sell their costumes. It is believed their playbooks met the same fate.

Nothing definite is known of the company’s membership. Based on the cast requirements of the plays, the company must have been a large one during its heyday in London, but was somewhat reduced when it was forced to go on tour. Since so many of his plays were associated with them, it is highly likely that William Shakespeare was a member and with him Richard Burbage. Evidence from the plays suggests that, as well as Christopher Marlowe, Thomas Kyd was also writing for them (see Thomas Kyd and ‘The Spanish Tragedy’). Their patron, the Earl of Pembroke, was known as a patron of the arts, but he was ill at the time so his wife, the famous Mary Sidney Herbert, Countess of Pembroke, may have been their de facto patron.

How the company came about is still conjecture, but it is generally believed to have been as a direct result of the quarrel between James Burbage and his sister-in-law.

The earlier parts of this story (see Part One and Part Two) recount the problems the Burbages faced in building and maintaining The Theatre, London’s first purpose-built playhouse. The personal consequences for the Burbages were grave enough but the confrontation between James Burbage and his sister-in-law Margaret Brayne was also to have significant and long-term consequences for the Elizabethan and Jacobean theatre.

The physical affray at The Theatre described in Part One took place on a play day and therefore in sight of the players preparing for that day’s performance.  According to a plot or prompt sheet for the play The Seven Deadly Sins, it seems that members of both the Lord Admiral’s Men and Lord Strange’s Men were playing there together at the time, including Richard Burbage. We cannot be sure what had led to their working together, but we do know what happened next.

By this stage, Edward Alleyn had brought his elder brother John, who had been a tavern keeper, into the Lord Admiral’s Men as a manager. During the affray, understandably enough, John Alleyn intervened on Margaret Brayne’s behalf, which would not have gone down well with James Burbage. A week or so later, John Alleyn went to The Theatre to collect some monies his company was owed. An argument ensued and James Burbage refused to pay up.

It would seem that, as a result, Edward Alleyn left The Theatre taking with him members of both companies. The next we know of him he is playing with Lord Strange’s Men while still wearing the Lord Admiral’s livery. Several of Alleyn’s colleagues from the Lord Admiral’s Men have joined him and a much-reduced Lord Admiral’s company is touring the provinces. By early 1592 Alleyn and Lord Strange’s Men had become the resident company at Henslowe’s playhouse, The Rose. Later that year Edward Alleyn married Philip Henslowe’s stepdaughter (see Edward Alleyn and Philip Henslowe).

After such a falling out Richard Burbage could not have followed Edward Alleyn to Lord Strange’s Men, but neither is he recorded as a member of the remnant of the Lord Admiral’s Men. It is highly likely that James Burbage called on his influential contacts (not only had he once been Lord Leicester’s man but at this time was Lord Hunsdon’s man) to acquire a patent from the Earl of Pembroke and set up a company led by his talented son.

However, their timing was unfortunate. In the wake of social unrest in June 1592, all the London playhouses were closed and stayed closed throughout most of 1593 due to plague. As a consequence, Lord Pembroke’s Men went on tour into the country, but, as we have seen, returned to London penniless. Most likely the members of Lord Pembrokes’ Men went on to form the Lord Chamberlain’s Men in 1594 (though in the interim some of them seem to have returned to Lord Strange’s Men.)

Given this feud between the Alleyns and the Burbages, it is understandable why, when the playhouses re-opened in 1594, the Lord Chamberlain was forced to form two major companies in London, rather than one – the Lord Chamberlain’s Men, led by Richard Burbage, playing at The Theatre, and the Lord Admiral’s Men, led by Edward Alleyn, playing at The Rose (see The Elizabethan Playing Companies). No doubt their rivalry would have helped inspire Shakespeare’s great achievements.

The first company under Lord Pembroke’s patronage might not have been a great success in its time, but it left an invaluable legacy which is with us to this day. However, despite this early failure, the Earl’s patent persisted. A new touring company was formed in 1595 which reached the height of notoriety in 1597 when they staged The Isle of Dogs which landed its author, Ben Jonson, and members of the cast in prison. (This incident was referred to in the film Anonymous, but characteristically the date and sequence of events were entirely wrong. See Anonymous: a fraud indeed.)