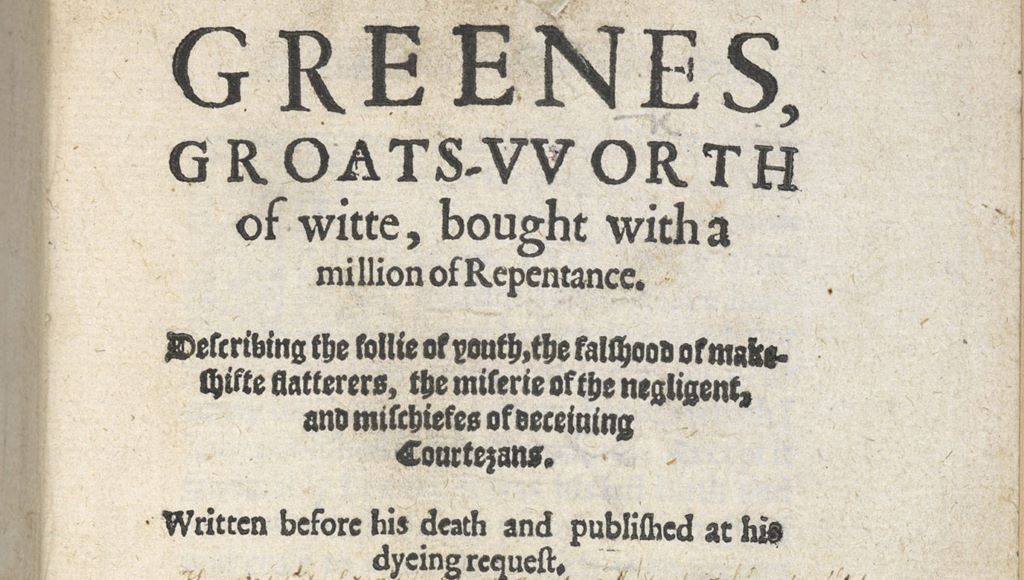 Robert Greene’s diatribe ‘The Groatsworth of Wit’ is invariably cited as the first mention of Shakespeare in London, but who is he really talking about?

On September 3, 1592 Robert Greene, a Cambridge educated hack novelist and playwright with an inflated ego, died in abject poverty, but not before penning a vitriolic pamphlet, The Groatsworth of Wit, in which he condemned the man, whom he did not name outright, but saw as the cause of all his misery.

…an upstart crow, beautiful with our feathers, that with his tiger’s heart wrapped in a player’s hide supposes he is as well able to bombast out a blank verse as the best of you, and being an absolute Johannes Factotum [Jack-of-all-trades], is in his own conceit the only Shake-scene in the country.

He went on to urge his friends not to give this man their work.

Shakespearean scholars have leapt on this passage, claiming that it is the first reference to Shakespeare in London and that it shows that he was already so successful a playwright that he was envied by others in his field. As proof of this assertion they cite Greene’s reference to a line in Henry VI, Part 3 and his use of the term ‘shake-scene’ which ‘must be’ a pun on Shakespeare’s name.

At the same time doubters have leapt on the same morsel as proof that Shakespeare was a plagiarist who misappropriated other authors’ works and staged them under his own name, thus fuelling the Great Authorship Debate. (see Did Shakespeare Write Shakespeare?)

Robert Greene was a renowned pamphleteer, one of many Elizabethan men of letters who indulged in long-running esoteric battles by pamphlet. Their usual practice, for fear of libel, was not to name names, but to refer to their antagonists by coded circumlocutions. At the time, no doubt, these oblique references were well understood, but from a distance of 400 years, modern scholars maintain that it is impossible to be sure to whom the pamphleteer is referring. However, we can be sure that the coded names refer to people that were well-enough known to their fellows to be easily recognisable.

Taking advantage of this doubt, Shakespearean scholars have felt free to lay claim to this passage and their identification of Shakespeare with the ‘upstart crow’ is never questioned in the Shakespearean literature. To this day, any biographer of William Shakespeare will cite this claim as undisputed fact, while Shakespearean biographies, text books and scholarly journals proudly take ‘Upstart Crow’ as their title. But what proof do we have that Greene’s unnamed antagonist was indeed William Shakespeare? Despite this confidence, there are serious scholars who do question their logic.

While Greene’s attack portrays his antagonist in a very bad light, Shakespearean scholars discount Greene’s particular accusations as groundless and motivated entirely by his jealousy of Shakespeare’s talent and success. However, was such jealousy justified at the time, or are scholars interpreting the text entirely in the light of hindsight and their own admiration of Shakespeare? In other words, was Shakespeare really in a position to be envied by Robert Greene?

By September 1592, despite his poverty, Robert Greene was a successful and well-recognised pamphleteer, novelist and playwright, whose plays had been performed by several major companies including the Queen’s, Lord Strange’s and the Lord Admiral’s Men. William Shakespeare had yet to make his mark. He had produced few plays, none of which would have stirred the jealousy of a man as self-congratulatory as Robert Greene, who saw himself as a rival to the premier playwright of his day, Christopher Marlowe. If Greene knew William Shakespeare at all it was as an uneducated country boy Marlowe had taken under his wing and to whom he paid no attention whatsoever. (see Christopher Marlowe and William Shakespeare)

In fact, as well as dismissing Greene’s accusations, Shakespearean scholars also dismiss the whole of Greene’s pamphlet except for those few lines in one paragraph of the letter closing the pamphlet while ignoring the rest of the pamphlet altogether. However, Marlovian scholar, A.D. Wraight, has studied Greene’s pamphlet in full and sees it in a completely different light.

The Groatsworth of Wit is a long, self-pitying and self-serving confession in which Greene tells the tale of an innocent scholar Roberto (himself, of course) who is approached by a rich and successful Player needing scripts for his theatre company. He offers to pay the scholar to write for him. As the Player gives him advances against pending scripts, the scholar goes into debt and thus falls into a life of exploitation and depravity.

Wraight made a careful study not only of The Groatsworth of Wit but others of Greene’s and other’s pamphlets and uncovered the real identities behind their coded names as well as studying the theatrical slang of the period. Wraight maintains that, if examined carefully and in context, the famous passage can be seen to refer to an actor, rather than a playwright. If we track back a few lines from that famous quote we’ll find the following (spelling updated):

Base minded men all three of you, if by my misery ye be not warned… those Puppets (I mean) that speak from our mouths, those Antics garnished in our colours. Is it not strange that I, to whom they all have been beholding: is it not like that you, to whom they all have been beholding, shall (were ye in that case that I am now) be both at once of them forsaken? Yes, trust them not: for there is an upstart Crow, beautified with our feathers…

We need only read a couple more sentences of that paragraph to find terms such as ‘puppets’ and ‘antics’, terms that in no way suggest playwrights, but quite obviously actors, as does ‘crow’.

The word that has caught the imagination of the Shakespearean scholars is, of course, ‘Shake-scene’ but just as much as ‘puppets’, ‘antics’ and ‘crow’ are referring to actors so, at a time when a highly vigorous style of acting was undertaken on fragile wooden stages, does ‘Shake-scene.’ (The capital letter does not necessarily make this a proper noun. Printers were as arbitrary with their capitalization as they were with their spelling.)

It should be obvious, therefore, that here Greene is not castigating a writer who steals from other writers, but an actor who is taking all the credit for the plays he performs without giving due recognition to the true authors. And while William Shakespeare may have acted, he would never have been considered the best in the country.

The other phrase which is believed to point to Shakespeare is a parody of a line from the play we now know as Henry VI, Part 3: O tiger’s heart wrapt in a woman’s hide!

However, As Oxford University Press has acknowledged in their edition of The Three Parts of Henry VI, the play was co-written by Christopher Marlowe. As Marlowe was the senior in terms of experience, it is most likely that William Shakespeare was the junior partner in that collaboration. In Greene’s eyes, it would have been Marlowe’s line he was parodying, not Shakespeare’s.

While Shakespeareans base their interpretation of Greene’s attack on a few words of the letter, the Marlovians read the whole of the pamphlet and can show how closely it follows the known facts about Robert Greene’s relationship, not with the as then unknown William Shakespeare, but with the star performer and theatrical entrepreneur of the day, Edward Alleyn.

Furthermore, in her study of several anonymous plays and entries in Henslowe’s Diary, Wraight has discovered that, while principally an actor, Alleyn also turned his hand to writing plays, albeit rather mediocre plays in blank verse. So while, in 1592, Shakespeare was a bit player with aspirations as a playwright, Edward Alleyn was an actor at the height of his powers, an entrepreneur who bought plays and lent money at interest, a playwright of sorts, and a much closer match for our ‘upstart crow.’

Therefore, Greene’s ‘upstart crow’, this actor who thought he could ‘bombast out a blank verse as the best of you’, was none other than Edward Alleyn, and as Alleyn never produced or published any plays under his name, not even his own, the accusation against him could not be for plagiarism, a sin barely recognised at the time, but for a much graver offence, Usury.

This interpretation is much more convincing than the slight and circular arguments of the Shakespeareans and has been known since the 1960s at least, yet it is never given any weight in the Shakespearean literature. Most biographers ignore it altogether and those that do acknowledge it dismiss it out of hand, even though it has fed a controversy that has raged for well over a hundred and fifty years.

Greene’s description of a usurious entrepreneur who dabbles in play-writing has allowed the doubters to paint William Shakespeare as a ruthless businessman who put his own name to other men’s work, who did not write a word of the plays himself, but merely paid for them and then presented them in his own name.

Hundreds of books have been written by these heretics claiming the plays were written by this or that claimant and thousands of papers have been written in rebuttal, yet still Shakespeareans stubbornly cling to their ‘upstart crow.’ The ultimate irony here is that if they would only drop the claim, they would rob the doubters of one of their major planks and, perhaps, they could finally triumph.