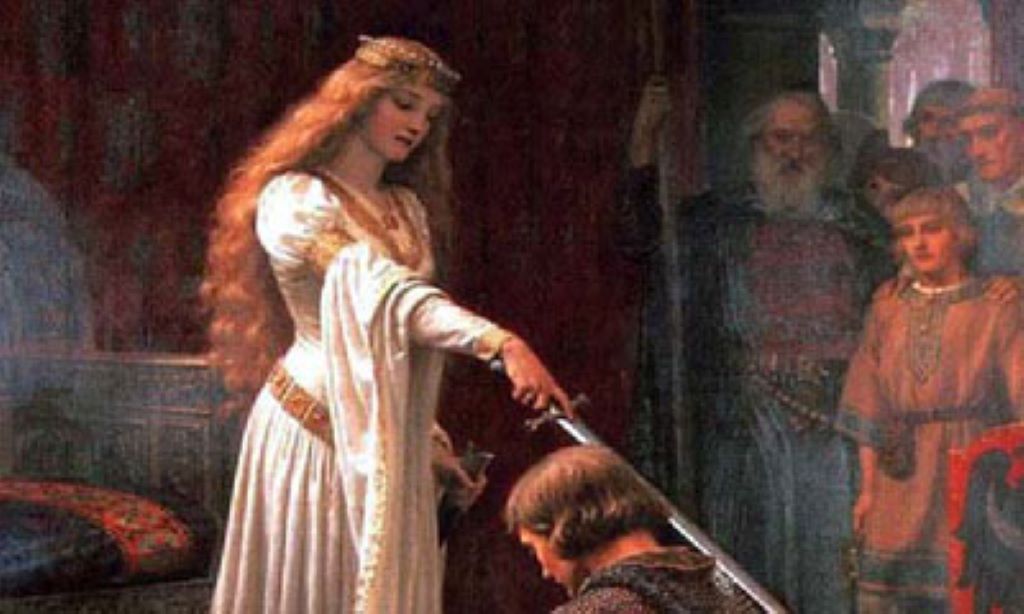 A young prince vies for the hand of a beautiful princess, but she is not what he expected.

Once upon a time a rich king sent his ambassador to all the neighbouring kingdoms to seek out a handsome and valiant young prince to marry his only daughter and heir. The ambassador was a seasoned diplomat who spoke with honeyed lips of the princess’s beauty, and of her wealth. Many impoverished young princes rallied to the call, but before they could sue for the hand of the princess they had first to accomplish a number of heroic feats.

So throughout the kingdoms, over the following months, young men were finding ancient treasures, killing loathsome beasts and braving fearsome forests. One by one the young princes came to grief and fell by the wayside. Finally only one prince had completed all the undertakings set for him and had earned the right to present himself to the king as a worthy suitor for his daughter.

The prince was a strong, handsome young man with eyes clear and blue, raised to esteem honour and glory. He was also the younger son of a neighbouring king whose realm had been reduced to ruins after generations of prodigal spending and fruitless wars. Just the kind of man the king was looking for.

On the day of his presentation at court, the young prince approached the king on his throne and bowed deeply, then inclined his head slightly to the plain young woman at the king’s side. Obviously a second wife, the prince thought. The king must love her greatly as she was no beauty and her gaze was fierce.

The king saw the way the prince looked at his daughter and was dismayed. If this young booby didn’t marry her, he thought, he’d never get her off his hands. However, on being formally presented to the princess, the prince remembered his manners and despite his surprise he bowed deeply and on rising had composed his face into a charming smile.

Nonetheless, the young man was sorely disappointed and back in his quarters he railed against the king and his ambassador who had deceived him. She was not the beautiful princess he had been promised.

The ambassador, however, was a wily fox. He could see the prince was an honourable young man. He need only keep him at court long enough to get him married. He knew that he could trust the young man to know his duty to his wife and father-in-law, and to his own impoverished kingdom.

Have patience, he told the prince. After all he had been through, would he baulk at this last hurdle? Could he not see that the princess had been enchanted? She had had a glamour thrown over her, which concealed her real self. Only the true love of a brave young prince could set her free. This tale appealed to the romantic young man and he agreed to stay. However, the ambassador knew he had a harder task on his hands with the princess.

The princess was as angry as the prince had been. How dare her father do this behind her back — offer her as a prize in some juvenile contest. Had she not always been a dutiful daughter to him? Did she not oversee his household and administer his exchequer? Did she not govern the kingdom whenever he was away on his endless hunting trips? Was this brainless courtier the best he could do? And she had seen the way that boy looked at her. She wasn’t what he had been told to expect, was she?

Could she not see, the ambassador put to her, that this rather simple young man was just what she needed in a husband — a man who would spend his time warring and hunting and who would let her get on with running the kingdom. And he was such a handsome young man, he added slyly, for he knew that the princess, for all her intelligence and diligence, had the same yearnings as other young women.

With some apprehension, the ambassador told the princess the tale he had spun for the prince. The princess was appalled. Did he expect her to wed under false pretences? What foundation would that lay for a happy marriage?

But true to his calling, the ambassador had great insight into the human heart. He proposed one last exploit for the prince. The princess listened to the ambassador’s plan, but she doubted it would succeed; he was expecting too much. Nevertheless, she agreed, as much from exasperation as from curiosity.

So the ambassador went back to the prince and proposed one last feat. The prince was to marry the princess, but on their wedding night he was neither to look at her nor to touch her, but rather to spend the night in conversation with her. The prince blanched to hear such exactions, but bravely he accepted the challenge.

In due course, the wedding day came to pass. The king, well pleased that his plans for his daughter were coming to fruition, held a great feast. He was somewhat concerned to see the young couple so distant and silent but he put it down to nervousness and proceeded to get completely drunk. Before all the guests were totally intoxicated, the young couple were swept away to be prepared for their wedding night.

The prince approached his bride’s chamber with much trepidation. He paused for a moment at the threshold to allow his eyes to accommodate to the gloom. The room was in darkness, except for one faint candle in the farthest corner which gave off barely enough light to prevent him from bumping into the furniture. He could just make out the princess’s form on the bed. He approached her cautiously, but before he could get in beside her, she directed him to sit at the other end of the bed where pillows had been placed for his comfort.

For a while they both sat mute, each afraid to start. Finally, the princess broke the silence by asking the prince to tell her about himself. The prince stuttered and hesitated at first but in the darkness it was as though he were talking to himself rather than to a relative stranger. Bit by bit he told her about his vigorous upbringing, about being the younger son of an impoverished king, about his romantic yearnings for daring adventures. The princess told him about her own lonely childhood, about the early death of her beloved mother giving birth to a younger brother who died himself soon after, and about her father’s grief. She told him about her pretty young stepmother who also perished giving birth to a stillborn son and her father’s inconsolable pain. She spoke of how her father had come to rely on her, but how she felt that he also resented her for living while his precious sons and their beautiful mothers were dead.

And so they talked through the night, each discovering much in the other, and in themselves, that they had not seen before. Deep in conversation, they did not notice the easterly sky begin to lighten or the sun peep over the mountains. Suddenly a shaft of brilliant sunlight flashed across the windowsill and bathed the princess in a golden glow. Caught by surprise, the prince gasped to see her beauty, the blush of her cheek, the warmth of her eyes. Yet even though the magical light dimmed as quickly as it had flared, the prince knew that he would, from that day forward, always see her as he had seen her in that moment, as his beautiful princess.

When, three days later, the young couple finally came down to breakfast, the king could see from the gleam in their eyes that they were sure to live happily ever after.